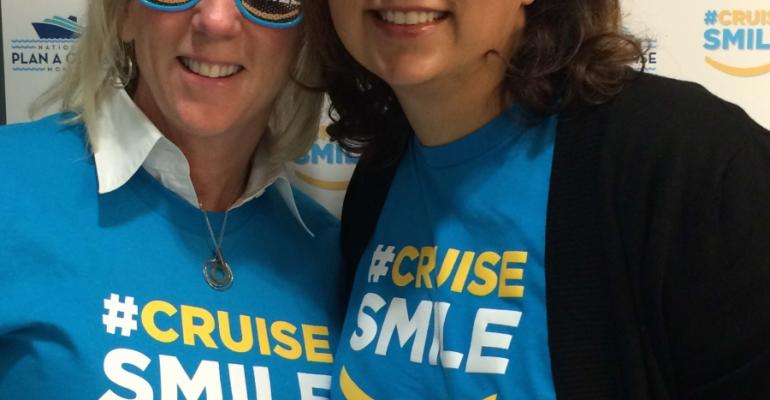 National Plan A Cruise Month aims to drum up excitement about cruising, and the #CruiseSmile campaign conveys the vast choice in shipboard vacations, according to its chief architect, Lorri Christou, svp strategic marketing and communications, Cruise Lines International Association.

#CruiseSmile will award a free cruise each day of October and flash across the big digital billboard in Times Square throughout the month.

Twenty-three of CLIA's member lines have provided cruises for the #CruiseSmile sweepstakes. All are outlined in a calendar at the www.cruisesmile.org microsite. Plus, there are ample discounts and offers.

'Our goal, besides creating consumer excitement, is to show there truly is a cruise for everyone,' Christou said.

Oct. 1, for example, will give away a Caribbean sailing on MSC Divina, while Oct. 2 has a three-night Bahamas jaunt on Disney Cruise Line and Oct. 3 offers seven nights in the western Caribbean on Freedom of the Seas. Oct. 4 features a Panama Canal sailing with Windstar Cruises, and Oct. 5 an eight-day Caribbean cruise on Carnival Breeze. A 14-day Southeast Asia cruise on Holland America is the Oct. 6 prize. River cruises in Europe and the US, a Tahiti voyage and a trans-Atlantic crossing are among the other give-aways.

On Sept. 30 CLIA hosts a #CruiseMonth Twitter event for travel agents, with prizes. This follows a webinar several weeks ago led by Christou and Charles Sylvia, vp membership. Christou was pleased with the response—850 agents registered and 500 logged in. The webinar is available on CLIA Cruise TV.

'We are definitely engaging travel agents, a very important audience for CLIA and the cruise industry,' Christou said.

In past years agents had to register to be part of CLIA's biggest annual consumer promotion. That's no longer the case. Following a revamp that opened association membership to individual agents as well as agencies, CLIA North America now counts more than 18,000 affiliated individual agents and more than 10,000 agencies.

Any member agent is encouraged to participate in National Plan A Cruise Month.

CLIA's Strategic Travel Agency Review Board has been kept apprised of plans for the promotion and provided feedback. A travel agent toolkit offers customizable news releases, logos and content to share on social platforms, as well as cruise line deals and promotions. Agents can even order #CruiseSmile t-shirts and, to Christou's delight, they're doing so.

In her view the most exciting part of National Plan A Cruise Month is the cruise industry's engagement. Lines are communicating with agents about the promotion and building on it.

Carnival Cruise Line, for example, is offering travel partners the chance to win one of 30 free cruises aboard the new Carnival Vista and a special group promotion, both available Oct. 1-31. In touting its offers for National Plan A Cruise Month, MSC Cruises USA included a picture of its team, including president Rick Sasso, decked out in #CruiseSmile t-shirts. At its annual conference, currently taking place aboard Norwegian Getaway, Nexion announced it ordered the t-shirts, too.

'We rebranded because we want to create a strong call to action. What we want people to do in October is plan a cruise,' Christou said.

Christou hopes that by next October, there will be an international event with a consistent message across markets.

In years past, as a follow-up to its promotion, CLIA routinely announced the estimated revenue generated from cruise sales, the number of agencies that held events such as cruise nights and how many people attended, in person or virtually. In 2010, for example, CLIA projected World’s Largest Cruise Night and virtual promotions throughout October had generated more than $47m in sales and more than $6m in potential commissions.

But she added CLIA does plan to measure media impressions and digital engagement impressions—counting #CruiseSmiles, of course.