Smiles all 'round for AIDAprima 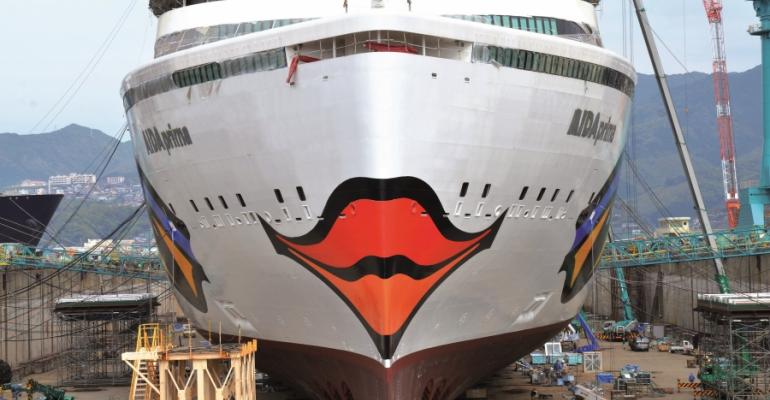 AIDAprima's lips will shine across a total area of 150sq mtr

Rostock artist Feliks Büttner, creator of the signature kissing lips, eyes and waves found on the bow of every AIDA Cruises ship, faced a special challenge designing the motif for AIDAprima, currently under construction at the Mitsubishi Heavy Industries shipyard in Nagasaki, Japan.

The designer had to adapt the graphic design for the first AIDA ship to be built outside Germany, as the bow of the MHI-constructed vessel is different from the others in the fleet.

The position lights and anchor hatch in the bow section also had to be taken into account in the application of the motif in order to create its familiar three-dimensional effect. A total 342 litres of paint in 11 colours was used.

In 1996, AIDA Cruises became the first cruise line to introduce a painting on its ships' bows.

For two decades, AIDA ships have been wearing the smile across the oceans.

When completed, AIDAprima’s kissing lips will shine across a total area of 150sq mtr. Each eye on the starboard and port side covers an area of 212sq mgr, and the blue waves on both sides of the hull fill an area of 330sq mtr. The entire painting extends over a length of 261mtr, surpassing all previous such paintings in the AIDA fleet.

The 124,500gt AIDAprima is scheduled to start its maiden cruise on October 1 from Yokohama, Japan. The 50-day journey ends on November 20 in Dubai. Following a winter season in the Middle East, the ship will depart from Dubai on March 18, 2016, headed for home port of Hamburg commencing a year-round programme of weekly cruises to Southhampton, Le Havre, Zeebrugge and Rotterdam end April.