SMIT starts preliminary work for the removal of fuel from Concordia 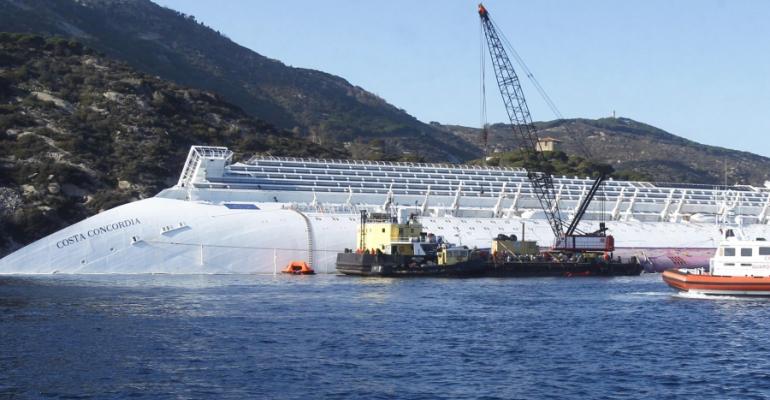 Salvage company SMIT has been given the go ahead to start preliminary work for the removal of fuel from the stricken Costa Concordia. Yesterday SMIT positioned a work/crane barge alongside the upturned hull of the ship and divers began to inspect the hull below the waterline.

This morning SMIT stressed to Seatrade Insider that removal of the fuel from the ship’s tanks had not started. The next stage will be drilling holes in the fuel tanks and installing valves by means of a hot tap. The Dutch salvor predicted this process may commence Thursday,  ‘but this is speculation at the moment’.

Over the weekend, a full bathometry survey was initiated to provide further insight into the seabed below the ship and the rock formations against which the ship is resting.

Following discussions with the Italian authorities, SMIT has been requested to take a number of additional precautions before proceeding with the oil removal.

The single oil containment boom around the ship must be a double boom, SMIT said. Booms are commonly used to reduce the possibility of polluting shorelines and to help make oil recovery easier. The additional oil booms have been mobilised and will be positioned around the vessel and fixed down.

SMIT has also mobilized an oil tanker with emergency response equipment including sweeping arms, booms and a skimmer. This vessel arrived on Monday.

It is understood that the Italian marine authorities will permit oil removal to commence once these precautionary measures have been put in place.

SMIT estimated the quantity of bunkers in the vessel at 2,200 metric tons of intermediate fuel oil, 185 metric tons of marine gas oil/diesel and lubricants, distributed over 17 tanks.