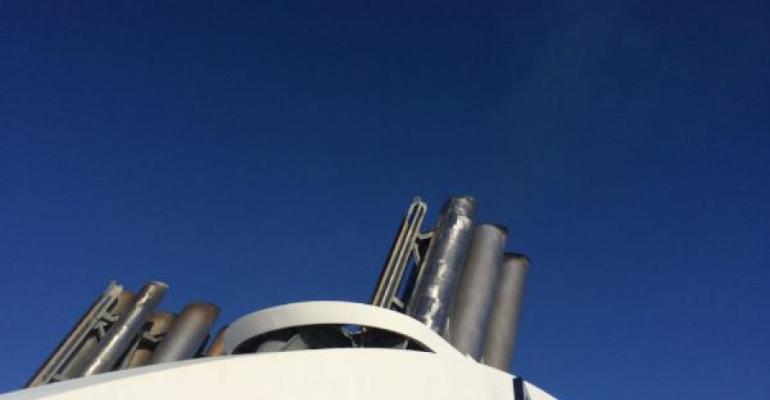 Custome-built antennae were installed on Oasis of the Seas

Blazing-fast Wi-Fi will not only break down a barrier to cruising for people who have to stay connected for work and enable passengers to download streaming content to their tablet or smartphone while at sea. It also will boost social sharing of the cruise experience in real time. 'This will fundamentally change our industry,' predicted Bill Martin, vp and chief information officer for Royal Caribbean Cruises Ltd.

'We have a phenomenal product. A lot of people don't know about it,' Martin said.

03B Networks' high-speed broadband in testing aboard Oasis of the Seas is 'truly revolutionary, unlike anything we've done before or anything else in the industry,' he told Seatrade Insider. 'The thing rocks.'

And president and COO Adam Goldstein noted that while first-time cruisers won't realize how much work it took to make Wi-Fi so fast and pervasive, 'If you are a returning guest, you'll be blown away by the improvement. It's that dramatic.'

The company is developing new pricing plans for added service, and by the time the system becomes available on Quantum of the Seas, there will be several new 'show-stopper' uses of the bandwidth, Goldstein said.

Martin said other cruise lines are testing technology with download speeds of 100 megabits per second while the Oasis of the Seas pilot is achieving 100 times that, over a gigabit per second. And latency, or data transmission time, is cut from 750 or 800 milliseconds to about 120 msec. The latency is reduced because O3b satellites are in medium Earth orbit, much closer than others.

Martin said the shipboard connection is 'frankly, faster than at my office.' And an advertising agency team working recently on board Oasis of the Seas were 'astonished' at how fast video and audio files were sent.

Recently fitted with a set of new, custom-built antennae, the ship is in testing with four O3b satellites that were launched in 2013. Allure of the Seas is getting the antennae, too, and both vessels are expected to have their systems commercially available in August, provided an additional four satellites are operating successfully by then.

Last week O3b Networks announced this second group of satellites had begun their journey from the Thales Alenia Space facility in Rome to the launch site at Kourou in French Guiana, where they are scheduled to go up in late June.

Telecom Cook Islands became the first customer to be brought up on the constellation of the first four satellites earlier this year. Many more customers are completing testing and will be turning up commercial service before the next launch, according to O3b Networks.

Tests with customers have attained throughput of up to 1.6Gbps and round-trip latency below 150 milliseconds, the company said, adding that interoperability testing found the innovative medium Earth orbit satellite constellation can support the low latency required for cutting edge 4G/LTE technologies.

'The reaction that we have had so far from customers and end users has been spectacular,' according to Steve Collar, CEO of O3b Networks. 'We have been saying that O3b will deliver "fiber from the sky" and our customers are now telling us that they are experiencing exactly that.'