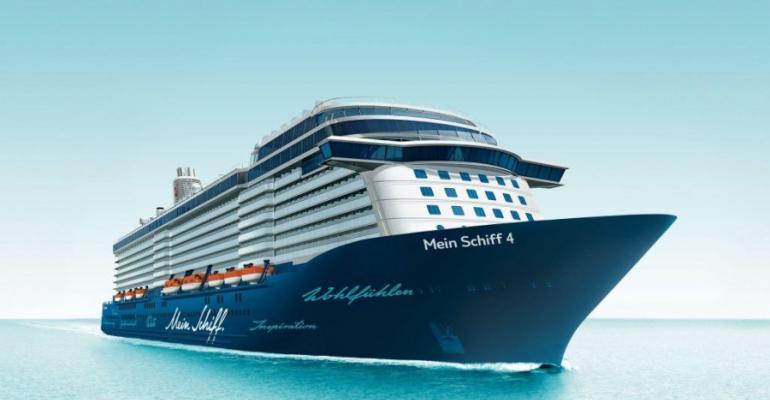 A rendering of Mein Schiff 4, to be christened June 5

TUI Cruises' Mein Schiff 4 will be named in Kiel on June 5, 2015, before its newly announced maiden voyage to Tallinn, St. Petersburg, Helsinki and Stockholm, June 6-14. For the first time, TUI will give maiden voyage passengers the opportunity to attend the christening ceremony, although numbers will be limited to 300 cabins and attendees will have to pay a fee that includes an extra night on board.

Kiel has always been an important port for TUI Cruises, according to ceo Richard Vogel. 'Right from the start it has been the base of most of our Baltic cruises as well as of many cruises to the north,' he said.

TUI will reveal further details about the christening program at a later stage.

Bookings for the first two Mein Schiff 4 cruises will open Oct. 15. Passengers wishing to take part in the christening have until Oct. 27 to state their interest. Subsequently, 300 cabins will be chosen in a procedure overseen by a notary. Those selected will be charged for the extra night on board and their attendance at the christening depending on their cabin category. The price starts at €549 per person.

Mein Schiff 4 itineraries after June 14 were released in the spring and opened for booking in March.