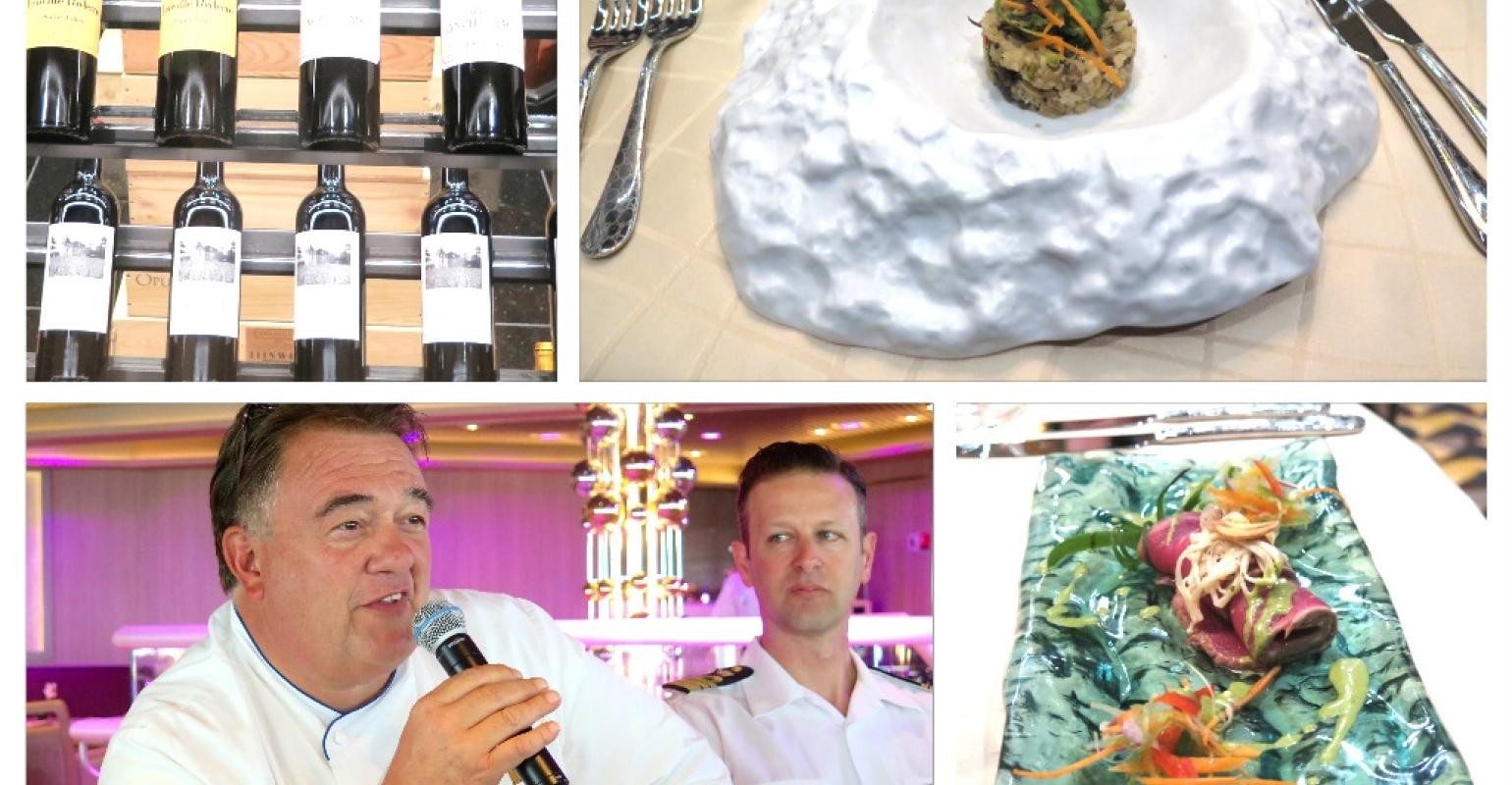 Aboard Silver Muse, from top left, clockwise: the wine cellar in La Dame by Relais & Châteaux, 'cereal' (top) and beef crudo (bottom) in Silver Note, and Rudi Scholdis, the mastermind behind the food

There's lots to like about the new Silver Muse—stylish but understated interiors, more space, roomier suites, wider corridors, a spa that offers a holistic sensory experience. But it's the eight restaurants that stand out most.

This is a huge number of choices for a 40,700gt ship carrying fewer than 600 passengers.

In Silver Note, where diners savor tapas-style dishes against a backdrop of live jazz and blues, 'The food was off the charts,' Sharpe said.

The small plates include dishes like sea bass ceviche, red snapper, beef crudo, duck and 'cereal' (grains and lentils)—all distinctively plated on unusual dishes. They're not presented in any strict order.

'I think it's going to be a big success,' Scholdis said.

The Belgian-born chef who was lured away from The Dorchester in London 17 years ago by Silversea chairman Manfredi Lefebvre D'Ovidio, explained most ship dining is built on a seven- or 14-day menu rotation. But in the range of restaurants Silver Muse offers, it's like dining ashore in that each specialty venue presents a consistent menu of dishes that have been perfected.

Silversea hasn't introduced a newbuild since 2009. When planning Silver Muse three years ago, Scholdis pondered how it could 'continue to be the trendsetter' in dining.

That resulted in a variety of choices but no 'main dining room.' The top restaurant, La Dame by Relais & Châteaux, serves classic French dishes prepared with locally sourced ingredients like foie gras and Limousin beef and paired with elegant wines. (The $60 cover charge here doesn't begin to cover the cost, Scholdis said, but is a way of controlling demand for what's a very intimate experience.)

The other formal restaurant, a grill, is Atlantide, serving steaks and seafood.

Kaseiki offers Japanese cuisine in a casual, convivial atmosphere, with sushi and sashimi featured by day. At night, the focus shifts to the teppanyaki grill where diners have front-row seats as the chef cooks. (There's a $60 charge for the teppanyaki experience.)

Also new is Spaccanapoli, high on Deck 11 overlooking the pool one deck below and featuring genuine Italian-style pizza.

These venues join Silversea familiars like Hot Rocks, where diners select their own meat, fish and vegetables to cook on their tabletop 400 degrees C. lava stone and La Terrazza for fine Italian cuisine and indoor/outdoor seating.

Not counted among the restaurants but also serving light dishes, which change depending on the time of day, is the Arts Café, where Scholdis created an illy coffee bar with 'pick and go' snacks like cheese plates, fresh fruit cups and smoothies. In the evenings, the music goes up and the lights go down, and canapés are served.

At night in Tor's Observation Library—named after Lefebrve's pal and fellow shipowner, Torstein Hagen of Viking Cruises, who dubbed the Italian restaurant on his ocean ships 'Manfredi's'—Scholdis presents a cheese bar.

Altogether, there are 26 dining concepts, he said. Though there's not a main dining room, La Terrazza is open for buffet-style breakfast and lunch, when action stations include a stations a mozzarella bar, a seafood station and a salumeria, and diners who want a traditional, sit-down, order-from-a-menu breakfast or lunch can go to Atlantide.

Plus, Silver Muse passengers can partake in 'all-around dining, any time, anywhere,' making their selections from a vast room service menu and having the dishes delivered anywhere on the ship.

A key element to distinguishing Silver Muse's dining is sourcing.

Scholdis shuns buying from the same mega-suppliers as other lines in favor of using his own network for treasures like white Alba truffles, earthy Bitto della Valtellina cheese, Parma ham and cold cuts from Italy, milk-fed veal from Holland and fresh fish in cities from Genoa to Barcelona. When it comes to beef, he doesn't look just from the US but also selects estancia beef from Argentina, Waygu from Japan and Limousin from France.

Wherever possible, fresh fruits and vegetables are locally sourced.

Simply put, Scholdis not only embraces but embodies traditional cooking methods and the Slow Food philosophy, to the benefit of Silver Muse diners.