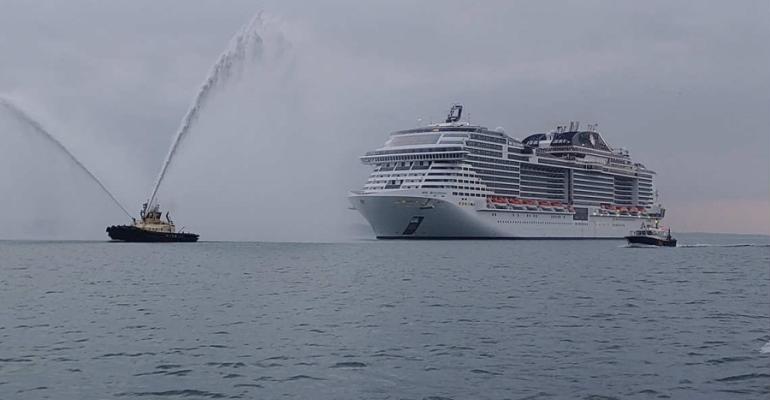 MSC Cruises’ 315mtr long newest ship, handed over by Chantiers de l’Atlantique earlier this week, is the biggest cruise ship ever to be named in the UK.

MSC's presence in the UK never been stronger

During the traditional plaque exchange for the ship’s maiden call, which took place onboard this morning, MSC Cruises executive chairman Pierfrancesco Vago said, ‘we are excited to be namingour latest ship in Southampton - the cruise capital of the UK – and we feel very much at home here in the UK.’

Together with its cargo and cruise divisions MSC employs 1,000 people in the UK. ‘Our presence in the UK has never been stronger,’ he remarked.

He noted the company’s Cruise Management Centre, based near Heathrow opened in 2015 ‘two days before the Brexit referendum’ and he added, ‘whatever direction Britain decides to go regarding the EU, we are here to stay in our second home.’

In a nod to Carnival, whose UK HQ’s could visibly be seen from the top deck of Bellissima, Vago said, ‘it is an honour to name one of our ships in Southampton following Queen Mary 2 and Britannia’s namings here in recent years.’

Alastair Welch, director Associated British Ports, said ‘it is a proud day for Southampton port and the city - Cruise is a fundamental part of what we do here.’

The number of cruise ships calling in Southampton has grown from 250 to 500 in the last ten years – ‘we are N. Europe’s biggest turnaround port and we hope to maintain that position and further develop our cruise business.’

The port is investing in new infrastructure and facilities to improve peak day capacity between Friday and Sunday.

‘We are spending £12m in infrastructure improvements at Ocean Terminal along with Carnival for the impending arrival of P&O Cruises’ LNG powered Iona in 2020 and her sister in 2022, but we are also working with a number of our cruise line customers not only to cater for their requirements of today but also in the future,’ Welch told Seatrade Cruise News.

On hand too was Niall Denholm, md of Denholm Logistics Group and MSC’s port agent for both the cargo and cruise side from many years. ‘MSC has a container ship and cruise ship in Southampton today so I am pleased the two vessels are berthed bow to bow.’

A visibly emotional Antonio Paradiso, md of MSC Cruises UK & Ireland celebrating his third anniversary heading up the UK & Ireland source markets for the cruise line called the UK debut of MSC Bellissima, ‘the peak of my career’.