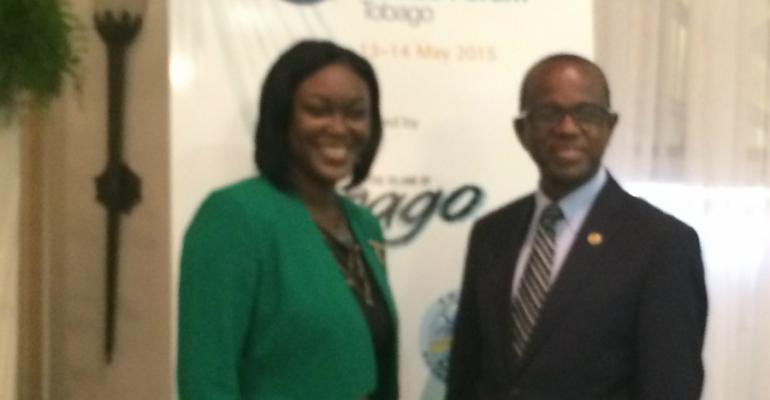 Addressing the Seatrade Caribbean Cruise Forum in Tobago, the Hon Richard Sealy MP, minister of tourism and international transport Barbados & chairman of the Caribbean Tourism Organisation, spoke about his optimism for the future development of cruising in the southern Caribbean, traditionally in the shadow of the more popular northern and western ports of the region which continue to attract the seven day ex-Florida based ships.

He spoke about rekindling the idea of a Southern Caribbean Cruise Alliance aimed at promoting cruising in the region, first floated by Sealy in 2013. ‘We held two meetings but with a recent change in some of the island’s tourism ministers we need to re-open the dialogue and push forward,’ the minister commented.

He added that in future any dialogue should also involve the private stakeholders in the islands’ cruise communities.

The minister called for a better co-ordinated approach from regional port and tourism officials, for the development of more home ports in the south, and  to try and tempt European lines to view the Caribbean as a year-round rather than seasonal arena.

Hugh Riley, secretary general of the Caribbean Tourism Organisation referred to a time of challenge and opportunity for the Caribbean, still the world’s most popular cruise destination. He also called for better co-operation between the islands whilst ensuring each highlights their uniqueness. ‘When you see one island, you only see one island and not the Caribbean as a whole’, he stressed.

Focussing on the southern Caribbean specifically, assemblyman Tracy Davidson-Celestine, deputy chief secretary Tobago House of Assembly and secretary of the island’s division of tourism and transport, the two sponsors of the event added, with so many islands located within overnight sailing of one another, the warmth of the people and safety of the southern region, ‘ist as if our destination is made for cruising.’

Mindful of the need to develop innovative product offerings, Davidson-Celestine, announced three new shorex for Tobago from next season: a zipwire canopy tour over the rainforest, and two unique local experiences -  learning to play the steel pan and goat racing.

In setting the scene for discussion, moderator and Seatrade md publishing Mary Bond, highlighted some of the challenges facing the Caribbean with increased competition from other regions, particularly with some of the biggest, newest ships going to China.

‘On the other hand, the Caribbean will be getting a number of new, high-profile, year-round ships such as Norwegian Escape later this year, and Carnival Vista from late 2016 (both based in Miami). The third Oasis-class ship, Harmony of the Seas, will sail from Port Everglades. And, starting in late 2017, MSC Cruises’ MSC Seaside, will join MSC Divina in year-round Caribbean operations from Miami.

How might the opening up of Cuba when it comes, reshape itineraries, particularly in the southern Caribbean was another subject of discussion.

Speaking from an ex-UK perspective Chris Coates, commercial director Cruise & Maritime Voyages, highlighted that 93% of UK passengers sailing in the Caribbean arrive via air. His company carry some of the 7% who start and finish their Caribbean voyages from a UK port. Currently some 14 ships from CMV, Cunard, P&O, Fred Olsen and Saga visit the Caribbean accounting for 21,476 lower berths in total.

Mike Deegan, fleet director Noble Caledonia operator of small ships has two calls by Sea Cloud 2 and Serenissima this coming season to Tobago at the tender port of Charlotteville. He called the Caribbean great for geological, flora and fauna cruises and asked the audience if you have an isolated bay then I may just be interested.

Martin Ince, ceo Foster & Ince Cruise group, spoke of the growing popularity of homeport cruises out of Barbados which is excellent news for the southern Caribbean, he stated.

‘Barbados’ success is closely linked to your success and he asked European operators to consider extending their seasons in the area or even going year-round.’

Carnival UK is homeporting three ships in Barbados this coming season: Britannia, Azura and Adonia and along with 14 ex-UK ships visiting the area and all three Cunard vessels visiting on round the world legs  the group will have ten ships in the Caribbean at some point.

Steven Young director of port services and governmental affairs said P&O fly cruise customers prefer 14 day cruises due to the flight length and winter sunshine appeal. He said said with the diversity of ships based in Barbados provides a great opportunity for ports in the area to gain more and new calls.

Michale Pawlus director of strategic itinerary planning Silversea, on his first visit to Tobago said he was impressed with the friendliness and diversity of the island. He called the

Caribbean, ‘a mosaic of countries, cultures and history, which is a huge draw.’

With ships get larger, the demand on infrastructure and facilities gets greater but both Saga Cruises’ marine superintendent James Langley and Chris Doval , Royal Caribbean Cruises Ltd senior port ops financial analyst worldwide, urged destinations to ensure a two-way dialogue for successful calls. ‘Everything is possible if everyone is committed,’ said Langley whilst Douval conferred, ‘with a unified effort and commitment any challenges can be overcome.’

Reflecting the trend to larger ships, Tobago has seen a 213% increase in visiting cruise passengers in the last decade whilst the number of calls has been steady, said Samuel Henry, transportation coordinator, Tobago division of Tourism & Transportation. ‘Scarborough had 44 calls and around 38,000 pax in 2004 and same number of calls in 2014 brought 63,309 passengers.’ He said the port was seeking to dredge to increase the depth of water alongside its 312mtr long berth to at least 10mtr to cater for the larger size ships sailing in the region.

Azamara Club Cruises’ director deployment, destinations and charters Claudius Docekal urged Tobago ‘to control its grwoth’ not to run before it could walk and ‘to make sure before accepting more tonnage that the infrastructure can handle it.’ Catering to the growing number of independents arriving is also an area that requires more attention, he noted.

Beverley-Anne Carter, director of the centre for language learning the University of the West Indies stressed a pressing need for training of multilingual guides as more international passengers arrive on Caribbean shores.