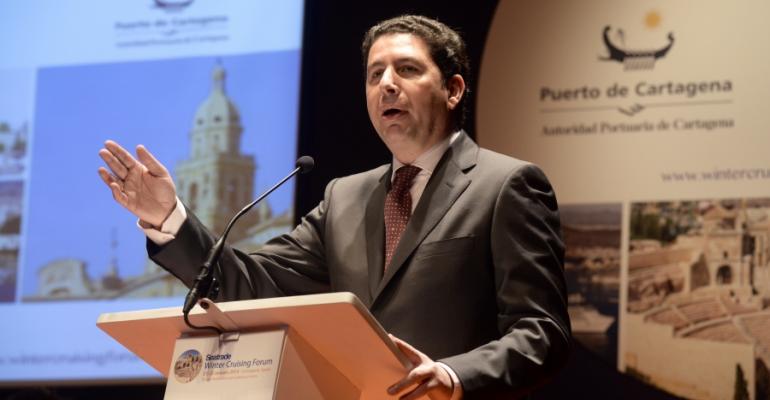 José Llorca, president of Ports of Spain Authority, hailed cruise as a key element for economic development in Spain, representing up to 11% of the country’s tourism revenues and bringing in 8% of Spain’s tourists.

'At the start of the 21st century we had double digit growth in the cruise industry with a peak of 8m passengers in 2011,' Llorca told delegates gathered in El Batel Auditorium and Conference Centre in Cartagena.

'This year we expect 7.7 million passengers, which represents great potential for economic benefit. Although there is a small drop in numbers, it signals a healthy recovery since the economic crisis.'

Growth was not evenly spread across Spain’s ports, according to Llorca, with passenger numbers at Barcelona, Europe’s largest cruise port and the world’s fourth largest, dropping 8% in 2013.  Progress was made elsewhere, with ports like Cartagena seeing 6% to 7% growth and significant growth in ports such as Tenerife, Bilbao, Málaga and others.

Weak years in some ports shows that there is still work to be done, he added.

'We have reduced port taxes to make Spanish ports more competitive and attractive. We are working to be more efficient, and trying to have our port facilities improve to offer everything the international cruise companies need. €180 million is to be invested in our cruise port facilities, and conditions will continue to improve to attract private investment.'

Carla Salvadó, president of MedCruise, applauded the region for being ready to host vessels all months of the year, thanks to a concerted effort of infrastructure development and expansion despite political and economic issues.

President of the Regional Government of Murcia, Alberto Garre, echoed the sentiments of post-financial crisis recovery: 'We are through the crisis times and ready for growth. Cartagena can be a partner for that growth, with willing and welcoming stakeholders. We want to learn from you and your expertise.

'The port authority and town hall make great effort to improve the offering to the cruise lines, we strongly believe in the value of cruise to the area, we are proud to see that in a few years we have become a competitive destination with 138,000 passengers. We will take steps to continue growing in a sustainable way.'

Garre went on to outline the area’s history, food culture, climate, beaches and other attractions that have attracted cruise tourism over the years.