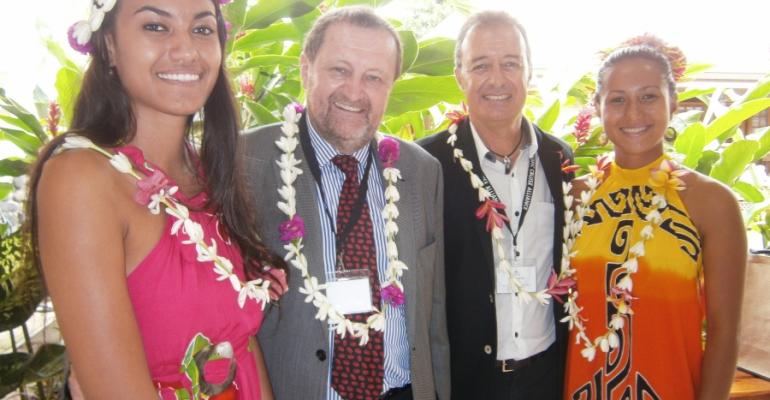 Amaru, president of the South Pacific Cruise Alliance which staged the forum and chairman of Tahiti Cruise Club, also said the government of French Polynesia plans to develop a new cruise port at Fakarava, an atoll with 800 inhabitants that will be able to accept ships of any size.

He said the SPCA has ambitions for a cruise ship dedicated to the South Pacific using Auckland as the main hub with two secondary hubs in Fiji and Papeete.

Amaru, a master mariner and harbour pilot for the islands of French Polynesia, was born in the south of France with a Tahitian father and came to Tahiti in 1985 where he co-founded the Tahiti Cruise Club, an organisation that promotes the region’s cruise industry. Members include the pilot station, tourism office, port authorities, ship agents and Air Tahiti Nui.

‘In 2009 the Tahiti Cruise Club attended Cruise Shipping Miami,’ Amaru said. ‘We had one table covered with a pareu, two coconut trees and that was it. We were invisible.

‘We went around the venue and among all the other destinations we found the Cook Islands in one place, Fiji in another and Samoa somewhere else.

‘So we said let’s exhibit together next year and this is how we started the SPCA.’

The first common booth exhibited in 2010 and SPCA was officially launched in 2011 with six members—the four founders, plus American Samoa and Tonga. Later New Caledonia and Pitcairn joined and potential new members include Niue.

Amaru said the South Pacific Tourism Organisation has given the SPCA its support and has joined it in Miami for the past three years. It will be exhibiting at Seatrade Cruise Global in Fort Lauderdale in March 2016.

However, Amaru said the SPCA will continue as an independent organisation restricted to cruise port members only, while the SPTO has a diverse membership including China.

‘We are also working together with Cruise New Zealand,’ he said.

Cruise New Zealand’s chairman Kevin O’Sullivan supported this by declaring ‘we are the largest Polynesian country in the South Pacific.’