Spectrum of the Seas heads for Eemshaven 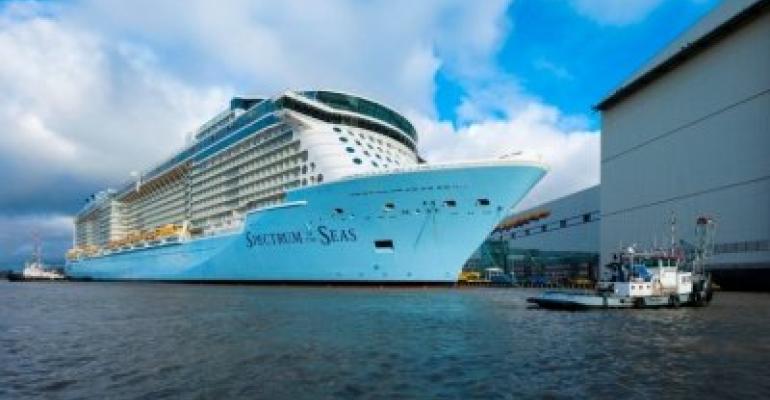 The River Ems passage had been postponed by twelve hours at short notice on Tuesday due to the river's high-water level resulting from heavy rain-fall in the region.

According to the amended schedule, the Royal Caribbean International newbuild left Papenburg on time shortly after 06:00 hrs (local time) on Wednesday. The ship is expected to arrive at the Gandersum Ems Barrier around 22:15 hrs this evening.

The ship is taking its usual course, heading backwards down the River Ems, assisted by two tugs. This mode has proven to be the best manoeuvre for the newly built ships due the narrowness of Ems River. The entire nautical crew handling the River Ems transit, including local pilots, were carefully trained on Tuesday for the operation in a simulator based in Wageningen (Netherlands), Meyer Werft said.

The 169,300gt Spectrum of the Seas is scheduled to arrive at Eemshaven early on Thursday. Following some final preparations, she will embark on her North Sea trials from the Dutch port later completing these trials at Bremerhaven where final work will take place to prepare the Spectrum of the Seas for her handover.

In addition, Saga Cruises' Spirit of Discovery and Norwegian Cruise Line's Norwegian Encore are under construction at Papenburg and due for delivery later this year.

In total, Meyer Werft's orderbook comprises 12 cruise vessels due for delivery through to the end of 2023. The yard says this orderbook is the largest one it ever had throughout its history.