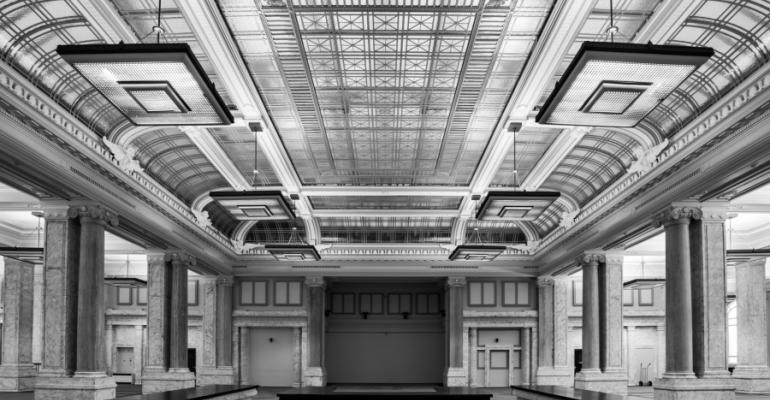 The inside of the Cunard building in Liverpool

Cunard Buildings in Liverpool, Southampton and New York each feature in a specially-commissioned set of images to be displayed in the ship’s suites and staterooms when the vessel re-enters service following a three-week refit taking place at Blohm+Voss in June.

He started work in December at the Cunard Building in Liverpool, this year celebrating the centenary of its opening as the line’s headquarters in 1916. It remained the global focal point of Cunard operations until 1967 and in 2004 became part of the City of Liverpool’s acclaimed UNESCO World Heritage Site at Pier Head overlooking the River Mersey.

The photographer then went to Manhattan where he spent time studying and photographing the Cunard Building at 25 Broadway. It too is highly noted for its architectural significance, with the entrance lobby and first-floor ticketing office designated a New York City Landmark in 1995.

The last of the former offices photographed in the current commission is the Grade II listed South Western House in the company’s home city of Southampton.

Angus Struthers, Cunard director, said, 'The scale and substance of each of these buildings is inspiring and reflects both the culture and heritage of Cunard over many decades. The architectural style as well as the interior layout and décor can clearly be seen to mirror that found on board our great liners of yesteryear. There can be no more fitting way to preserve and celebrate this unique aspect of Cunard history than by incorporating Paul’s stunning images on board our flagship Queen Mary 2.

He called the exterior of the building in Liverpool 'striking and the inside 'stunning.' Whilst the  inside of the Broadway building 'is simply breath-taking' he remarked. At Southampton, the Grade II listed South Western House with its long association with ocean travel, 'was also an inspirational location'.