SS United States gets a lifeline from Crystal Cruises 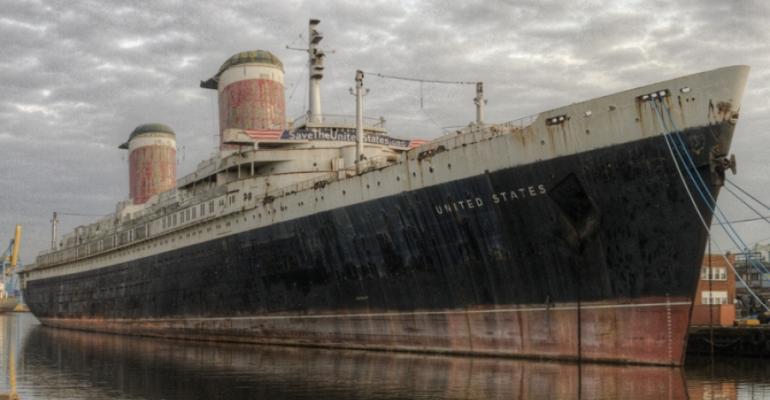 Crystal Cruises has signed a purchase option to acquire the world's fastest ocean liner, the SS United States, with plans to restore her and put her into service, sailing the world.

The company would spend at least $700m 'and probably a lot more,' to bring the 1952-built steamship into working order, Crystal president and ceo Edie Rodriguez told Seatrade Cruise News. Pending numerous matters, the earliest that could be is mid-2018, she estimated.

'She is an icon and so much a part of the American fabric and history,' Rodriguez said, noting that four US presidents had sailed aboard. 'Our industry would be remiss if we let her go. We want to restore her, to the extent possible.'

Rodriguez compared the liner to classic hotels like The Plaza in New York or the Art Deco gems on Miami's South Beach that were 'crumbling, and look at how fabulous they are now—the chicest resorts around.'

First steps will be work with the Environmental Protection Agency to ensure no dangerous substances remain, plus a feasibility study to include whether and how the vessel could comply with SOLAS regulations. Crystal has already hired retired US Coast Guard Rear Adm. Tim Sullivan to work with its marine and technical department.

Tan Sri KT Lim, the chairman and ceo of Genting Hong Kong, Crystal's parent, agreed it would be a shame to see the ship scrapped, Rodriguez said.

Genting HK's acquisition of the vessel would be coming full circle.

And back then Lloyd Werft, the shipyard Genting HK now owns, had been expected to handle the interior refurbishment work for the vessel, which left commercial operation in 1969. According to Rodriguez, it's too early to consider where any work might be carried out now.

NCL had talked of converting the United States into a modern vessel that would offer mainland US itineraries. That plan, like many others, faced steep challenges.

Shattering the trans-Atlantic speed record in 1952, the year of her launch, the United States became a symbol of US national pride.

Designed by top naval architect William Francis Gibbs, the United States was built for $79m at Newport News with an eye toward military conversion if needed. According to the SS United States Foundation, 'The design characteristics encompassing the United States read straight out of a James Bond novel, many remaining classified by the Navy well into the late '70s.'

Yet the United States fell victim to the rise of trans-Atlantic jumbo jet service and in 1969, the liner was mothballed at Newport News. A decade later, Seattle real estate developer Richard Hadley paid MARAD $5m with plans to turn the vessel into a time-share, but his United States Cruises Inc. went bankrupt in 1992.

Marmara Marine, Inc., controlled by Kahraman Sadikoglu, stepped in to save her from the scrap heap with a $2.6m bid and towed United States to Istanbul for refurbishment. The late cruise industry veteran Fred Mayer, Marmara's US front man, estimated work would cost up to $160m. Speaking to Seatrade in 1992, Mayer said the 50,924gt United States could carry 2,400 passengers and 'it has to be put in a mass market, maybe New York, maybe the Caribbean.'

From Turkey, the vessel went to Ukraine for asbestos removal before being towed to Philadelphia Naval Yard, her home until now. Sadikoglu dropped the project, which was assumed by real estate investor Edward Cantor. Cantor rejected proposals including one that would have transformed the United States into a floating convention hotel in New York City. NCL purchased the liner from Cantor's estate for an undisclosed price.

After NCL, the liner has been owned by the SS United States Conservancy, and efforts to save it waged on.

The late maritime historian John Maxtone-Graham, author of 'SS United States: Red, White & Blue Riband, Forever' (2014) once told Seatrade Cruise News the liner was over-engined for its size and made the first extensive use of aluminum so it was like a sprinter with powerful legs and a lean torso.

A video of Maxtone-Graham touring the United States at Pier 82 on Philadelphia’s Delaware River is here.