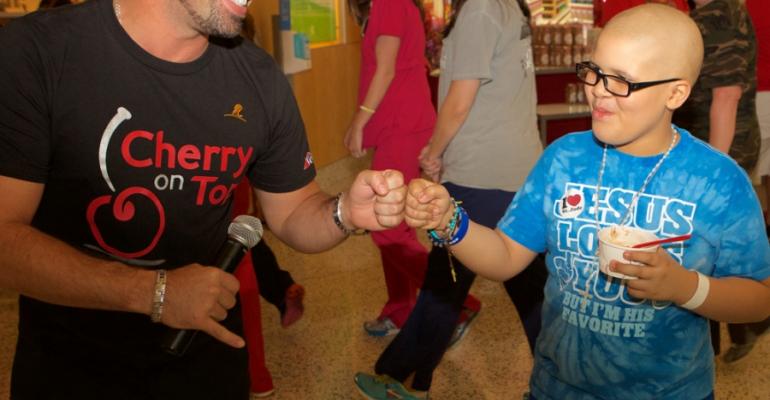 Brownie Buoy has been selected as the newest flavor that will be served at Carnival Vista’s Cherry On Top, a sweets shop featuring a premium mixed-to-order ice cream venue.

The flavor was picked by patients at St. Jude Children’s Research Hospital during an ice cream party at the hospital in Memphis. The kids were asked to sample three ice cream flavors that were previously selected by Carnival Cruise Line's Facebook fans as part of a social media contest.

Brownie Buoy, made with sweet cream ice cream, brownie bits, fudge and caramel, received the most votes and will be among the treats served at Cherry on Top on Carnival Vista when it debuts next year. Proceeds from each sale of Brownie Buoy will benefit the hospital.

The indoor/outdoor Cherry on Top confection store is among the novel spots on Carnival Vista, which will also feature the cruise industry’s first IMAX Theatre, a suspended cycling experience called SkyRide and the line’s first raft ride, the 455-foot-long Kaleid-o-Slide.

Carnival's partnership with St. Jude began in 2010 and was expanded in 2013 with the cruise line being named the hospital’s Official Celebration Partner. Carnival is on track to raise $8m for St. Jude by 2017 through a range of activities so that families never receive a bill for treatment, travel, housing or food.

Carnival Vista is scheduled to enter service in Europe in May 2016, then reposition to New York for a series of voyages in November followed by the launch of year-round Caribbean service from Miami later that month.