Stein Kruse on the power of the brands, the Princess 'juggernaut,' newbuilds and China 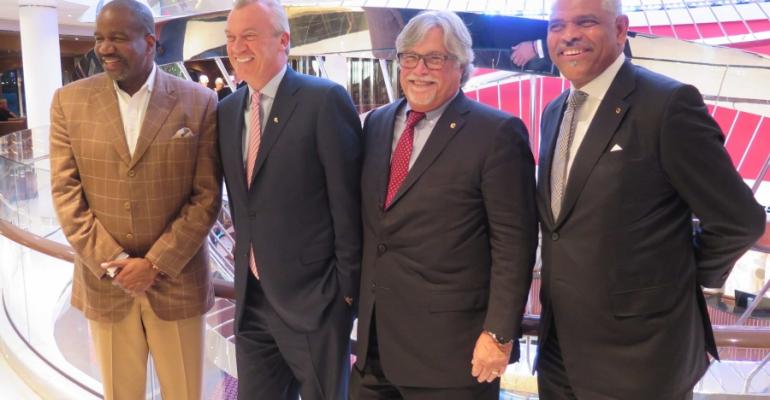 Princess is a global juggernaut. Holland America Line leads destination cruising. P&O is one of Australia's most powerful brands in any category. And Seabourn is the most recognized luxury cruise name. So says Stein Kruse, ceo of the Holland America Group.

His, the largest division in Carnival Corp. & plc with more than 40 ships and 40,000 employees, is perking along.

Princess leads international growth in booming markets like China, HAL has just successfully introduced a ship that's transitioning the brand for the future, P&O Cruises Australia will get its first newbuild in 2019 and Seabourn, with its upcoming ships, will advance as the youngest luxury fleet.

2016 is shaping up to be a solid year for the cruise business, Kruse said in a wide-ranging interview aboard the new Koningsdam in Europe. He noted the initial earnings guidance issued by the three major public companies has held despite geopolitical issues.

In the Holland America Group, he's focused on leveraging each brand's strength, for the good of Carnival Corp. 'I'm an evangelist for Princess, Holland America, Seabourn and P&O. My ambition is to allow these brands to become hugely successful,' Kruse said.

Princess is 'an incredibly powerful brand with a 50-year history, a juggernaut.' With 18 ships and three newbuilds on the way, it will continue to grow, he said, and is spearheading new markets like China. Holland America stands for tradition with a 143-year history and worldwide destinations plus a product, embodied in the new Koningsdam, that appeals to an 'incredibly wide psychographic.' P&O Cruises Australia 'defines cruising Down Under,' and Seabourn is the 'ultimate luxury cruise line.'

Dynamic brand leaders are in place. Sture Myrmell was promoted to president of P&O Cruises Australia in 2015. He's 'an operator by nature who's basically owned the product,' Kruse said. Orlando Ashford, who became HAL president in late 2014, is 'a unique leader.' Princess president Jan Swartz is 'bright as heck and on a mission,' and president Rick Meadows is 'the perfect person to lead Seabourn.'

The group's shared services teams were put in place in late 2014 and Kruse is proud how employees across brands are 'communicating, collaborating and cooperating'—a phrase he coined that's become a Carnival corporate mantra.

This structure allows Kruse to focus on strategy, capital allocation and people development.

After 2.5 years, the hard work of planning and implementing the group is done, he said, and everyone's settled down. 'We're delivering results. For us now, it's continuing the journey and advancing new technology that can eliminate some redundancies, and tightening some of the organizational structure.'

Implementing the group took skill and diplomacy. Kruse paid particular attention to the sensitivities at Princess, a long-time fierce competitor with Holland America. He spent plenty of time at Princess headquarters in Santa Clarita, California, and was visible and accessible there.

'If anything, I'm more excited about the Princess brand than any other,' Kruse said. 'I believe Princess may be the most powerful brand in the business. It transcends borders. It has an incredible team, run by Jan [Swartz].'

Kruse championed growth for Princess. When he took over, two Royal-class ships were planned. He successfully lobbied for three more.

Currently Princess sources about 50% of its business outside North America, so it's already a global brand.

'I see Princess continuing to grow. I don't see Princess limited to just being a cruise line. You can brand other things. The brand works in Asia, the UK, Australia, China,' Kruse said.

The 2017 newbuild Majestic Princess is being tailored for Chinese cruisers. Swartz and evp Tony Kaufman, who leads international operations, are opening offices and hiring people in China.

China is 'an incredible market, completely nascent,' where people don't know what cruising is, travel agents are unsophisticated and there's no direct to consumer selling. Most cruises are chartered to state-owned entrepreneurs who act as retailers. If something happens, such as when MERS put Korea temporarily off-limits, shipowners are protected but chartering isn't the best driver of growth and a practice Kruse believes eventually will change.

'Yet we're successful,' he said of Carnival Corp.'s China efforts. 'We're pioneers. We have successfully developed cruising in the rest of the world. There's no reason why we can't do that in China and beyond.' He includes Southeast Asia, using Singapore as a hub, and other markets, such as Taiwan, are interesting, as well.

Carnival Corp.'s new China chairman, Roger Chen, the former president for Volvo Group in China, is building the infrastructure so that cruises one day can be sold directly, which Kruse said ultimately will be in China's best interest. Someday, the requirement for visas to travel abroad will probably change, too.

For now, Kruse thinks Wall Street is too hung up on China's 'economic gyrations.'

'The yields we're getting there exceed anywhere else. If these gyrations affect our market, we can move like that,' Kruse said, snapping his fingers.

As for Australia, despite the weaker currency there, the market remains attractive with the world's highest cruise penetration rate: more than 4%. Kruse credited Carnival Australia executive chairman Ann Sherry for an 'amazing job' of raising awareness.

'P&O Cruises is synoymous with cruising in Australia,' he said, adding that while other companies have moved in and out, P&O is there year-round and sails from diverse homeports including Sydney, Brisbane, Perth, Adelaide and Auckland, New Zealand.

P&O's five ships are refurbished and perform well, but the youngest is 20 years old. 'To really take advantage of the power of that brand and unleash its potential,' Kruse advocated a newbuild. It will be an 'incredible ship' that leads the field in Australia for the next decade, he said. 'I'm very bullish on Australia.'

Kruse, who planned the ship four years ago with Carnival chairman Micky Arison, recalled that at the time, there was concern about moving from HAL's mid-sized ship profile into the 100,000gt realm. 'The 99,500 [gross tons] sounded much better,' he said. But with the increase in vessel sizes across the industry, that hasn't been an issue.

Koningsdam feels more spacious at 3.5 meters wider and 17 meters longer than HAL's Vista-class ships. Interior designers Adam Tihany and Bjørn Storbraaten created a more contemporary look, and Kruse said HAL has 'shed the image of not really having great entertainment to being one of cruising's entertainment innovators.' Pointing to Koningsdam's Music Walk, he said 'a whole part of the ship is in entertainment mode.'

More dining choices, improved accommodations and the hospitality of HAL's 'incredible crew,' some with 10, 15, 20 or even 25 years of service, give the brand broad appeal.

When it comes to destinations, Kruse asserted 'Nobody can beat Holland America Line. We take more people to more places than anybody else.' The line caters to 'globe-trotting learners, people who like to go and learn, be part of wonderful experiences and do it in style.'

Meanwhile, Seabourn is 'on a roll.' Kruse praised Rick Meadows' command and said the partnerships with designer Adam Tihany and chef Thomas Keller 'will take a super-powerful brand and raise it higher.'

According to Kruse, Seabourn is the most recognized luxury cruise brand, and Seabourn Encore, entering service late this year, followed by Seabourn Ovation in 2018, will ensure the line fields the world's youngest luxury fleet.

'It's a brand that's on fire. It's just rocking, and the crown jewel in Carnival Corporation,' Kruse said.