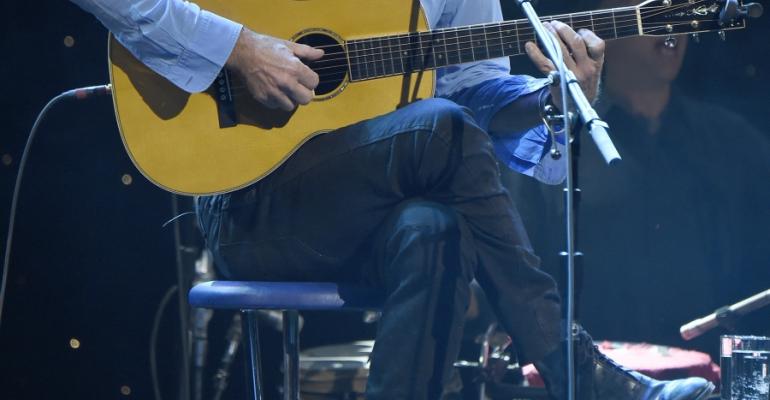 Sixteen-time Grammy award-winning musician Sting performed songs from his latest album, The Last Ship and new Broadway musical of the same name, in New York on board Cunard’s Queen Mary 2.

The one-off performance took place Tuesday in front of an invited audience in the Royal Court Theatre, two days after the musician made his official debut as a Broadway composer.

Set in his hometown of Wallsend on Tyneside in the North East of England, The Last Ship draws on Sting’s memories of growing up next to the Swan Hunter shipyard.

Fifteen Cunard ships were built at the yard, including the four-funnelled Mauretania, once the biggest ship in the world.

Sting said: ‘Cunard is one of the most famous names in shipping and a lot of very notable ships were built on Tyneside – Mauretania and Carpathia, to name but two. There’s a great lineage.

‘I was born and raised in Wallsend in the shadow of the Swan Hunter shipyard. My earliest memories are of ships being built and launched into the river. You couldn’t escape Swan Hunter – there was a coal mine at one end of town and Swan Hunter at the other, so these ships loomed over our houses.

Sting will also perform songs from The Last Ship in the UK next April to benefit the Sage Theatre Gateshead 10th Birthday Appeal. The two performances, sponsored by Cunard, are sold out.

Angus Struthers, Cunard’s marketing director, said: ‘We are absolutely delighted to have welcomed Sting on board Queen Mary 2, where the audience enjoyed songs from his new Broadway musical as well as tracks such as An Englishman in New York and Message in a Bottle.

‘As we prepare to mark Cunard’s 175th anniversary in 2015, our support of Sting’s benefit concerts at the Sage next April is a fitting way to commemorate the place where so many of Cunard’s finest ships were built. The Last Ship captures the heart of the Tyneside shipbuilding industry, reflecting Cunard’s own special heritage with the North East.’