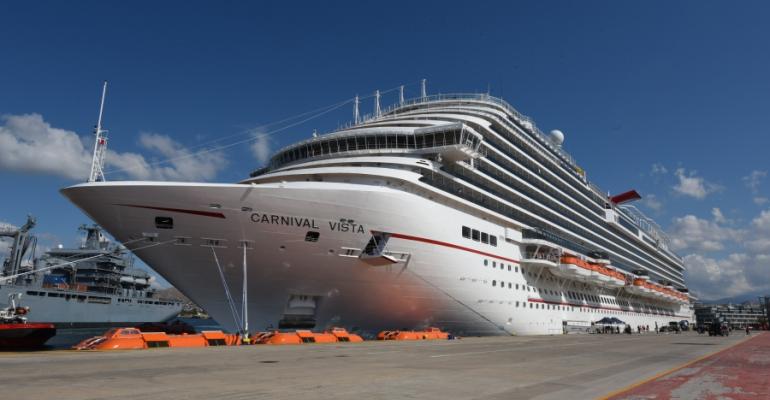 Carnival Vista is due in Piraeus again on June 20

Ongoing 48-hour strikes by dockworkers at Piraeus and Thessoloniki are a major headache for cruise lines with ships in transit or on turnarounds at both ports and could cause long-term damage to the image and future of cruising in Greece.

Losses from cruise ship activity in June alone will top €12m ($13.4m) in cash terms, warns Greece’s Association of Cruise Ship Owners and Maritime Agencies, if the action launched May 26 does not stop.

A decision by workers whether to continue the rolling 48-hour strike action was expected Tuesday.

The strike’s impact on the credibility of Piraeus was raised by Piraeus Port Authority (PPA) chairman Yiannis Kouvaris, who noted the increasing frustration of cruise lines and referred to a letter from Bill Sharp, vp at Holland America Line, warning it may re-evaluate its future policy regarding Greek ports if the situation continues. Sharp said he had received reassurances from PPA officials last year about the reliability of port workers.

Players in the cruise market warn Piraeus in particular risks missing out on making the most of the situation that has tourists avoiding Turkey and Egypt this year due to security issues, with cruise lines turning to Greek destinations instead. What was shaping up to be a bumper season could end up being a disaster, especially as a number of leading owners have expressed an interest in homeporting in Piraeus.

In a bid to appease striking port workers, the government is seeking to transfer disaffected staff to other parts of the civil service.

Greece’s Association of Cruise Ship Owners and Maritime Agencies (EEKFN) released figures showing that as long as the strikes continue, in the period June 4 to July 3 when some 41 cruise calls are slated for Piraeus, the direct financial impact from the reduction of tourism revenues will amount to €3.5m-4m, port and airport service revenues will drop by €2m-2.5m and commercial revenue from supply payments and other items will fall €5m-5.5m.

Dockworkers are protesting job losses under the concession contract signed by Greece’s privatisation agency, Taiped, and China’s logistic’s giant Cosco Pacific, under which Cosco is buying a 67% stake in Piraeus in a deal ultimately worth some $700m.

The agreement has a ‘zero’ employment clause which means Cosco is not committed to retaining staff and has already indicated sub-contract workers will be preferred over contract employees.

The transfer initiative emerged as shareholders of PPA at a June 10 meeting in the Athens Stock Exchange ratified the concession contract. Piraeus employs 1,121 workers and Thessaloniki has 420, many of whom took part in a rally outside the ASE premises during the meeting. Bids for Thessaloniki are due to be called in September.

The plan to transfer port workers has been discussed by Shipping and Island Policy Minister Thodoris Dritsas and other cabinet officials. In a letter to unionists, Dritsas said this would be put up for public consultation soon. But head of the Greek port workers union, Giorgos Georgakopoulos, said the assurances offered by the government were not satisfactory. 'We have no other choice but to continue with our action,' he said.

Taiped chairman Stergios Pitsiorlas, who is overseeing the privatisation of both ports, said the strikes were 'disastrous'.

The cruise season is just getting into swing and on June 11 seven vessels with 12,000 passengers called Piraeus.

For now, ship’s crew have been doing their best to double as porters during the Royal Princess turnaround on June 11. Carnival Vista is scheduled to arrive on June 20 for a turnaround.