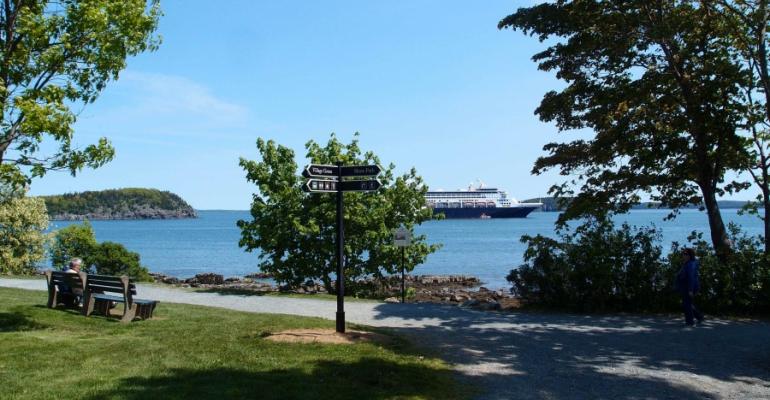 A scientific study of Bar Harbor, Maine's water quality during the 2015 cruise season found 'excellent water quality' and that cruise ships adhered to the harbor's no discharge policy and held all wastewater during port calls.

Bar Harbor is Maine's leading cruise destination, with more than 140 calls in 2015. Water quality monitoring there was first undertaken in 2004 in response to citizen concern about the potential for cruise ship impacts.

For the May to October 2015 cruise season water quality testing was conducted by the Community Environmental Health Laboratory at MDI Biological Laboratory in Salisbury Cove, Maine.

Testing covered samples from 16 ships on nine occasions with a control on each sampling day, for a total of 25 samples, according to a report by project leader Dr. Jane Disney of the MDI Biological Laboratory. Anchorage Alpha and Anchorage Bravo were each sampled eight times. Control Site Bell Buoy #7 was sampled nine times. Ships at the Town Pier were sampled two times. To establish baseline readings when no ships were present, samples also were taken weekly at the Town Pier on a total of 18 dates.

For the purposes of this study, fecal bacteria and oxygen were the most important indicators of healthy water, as bacteria relates to public health and oxygen levels relate to overall ecosystem health, Disney said.

No bacteria samples at any site reached the Environmental Protection Agency's exceedance level of 104 MPN/100 mL, according to the report. The study found 95% of bacteria samples around cruise ships were below 10 MPN. The highest bacteria concentration during the 2015 cruise monitoring was 41 MPN on Aug. 18, when Grand Caribe was docked at the Town Pier.

Chlorine, used to treat wastewater in some ships with marine sanitation devices, can be damaging to the environment when discharged, even at low levels. The report cited the EPA's recommended maximum for all fish and aquatic life as 0.01 ppm. Most marine plankton species are killed when levels reach 0.1 ppm. During the 2015 monitoring season, average total residual chlorine levels across all sites were below 0.1 ppm, the study found.

Elevated nutrient levels can cause algal blooms, leading to a decrease in light and oxygen in the water. The study sampled for nitrate and nitrite, ammonium and phosphorus. Dissolved inorganic nitrogen (DIN) is calculated by adding nitrate, nitrite and ammonium. The study detected elevated levels of DIN at the Town Pier in May, and an increase in DIN at offshore anchorages Alpha and Bravo, and the Control Site, in October. The report said the DIN increase can be attributed to spikes in ammonium on those days. Elevated DIN was not accompanied by elevated phosphate levels.

Phytoplankton populations were tracked during the cruise season, too. No species were detected that were atypical for the Gulf of Maine. This means there were no apparent non-native (foreign) phytoplankton species that would be indicative of a ballast water exchange.

The study concluded Bar Harbor has 'excellent water quality,' and recommended the city continue to monitor water quality on a regular basis.

'In our opinion, the focus of a monitoring program does not need to be on cruise ships in particular,' the report said. 'A broader-based monitoring program will help to address behaviors by operators of all types of vessels, may help pinpoint land-based pollution sources, and provide on-going baseline data so that we understand changes that may occur over time.'

Bar Harbor's current policy requires all cruise ships to hold wastewater, including gray water, whether at anchorage or alongside. The report recommended the city modify its policy to include all boats that visit Bar Harbor.

In an email Powers told Seatrade Cruise News that CruiseMaine USA considers it 'very important' to monitor the water quality in and around Frenchmen’s Bay.

'By doing so,' she said, 'we ensure the community that the industry is committed along with all other stakeholders to the health and vitality of the destination. Working together also increases comfort levels and enforces collaborative destination management.'