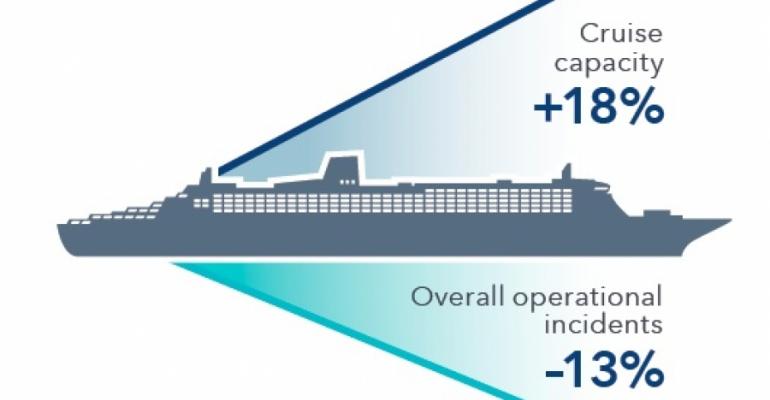 Peter Wild - During time of rapid growth in passenger volume, cruise ships 'not only maintained their exceptional safety record, but were also shown to be safer than most other forms of travel'

During the same time frame, according to a data analysis by UK-based maritime consultancy G. P. Wild (International) Ltd., cruise travel was safer than other common forms of leisure transportation, even airlines, with the lowest occurrence of operational-related fatalities across all modes of transport.

In addition, the number of cruise ship overboard incidents has declined, while more of the people going overboard have been rescued.

'During this time of rapid growth in passenger volume, cruise ships not only maintained their exceptional safety record, but were also shown to be safer than most other forms of travel,' said Peter Wild, managing director of G. P. Wild.

'The industry is safe and improving,' he told Seatrade Insider, adding that the study, to his knowledge, is the most in-depth comparison of leisure transportation safety ever conducted.

It was commissioned by Cruise Lines International Association, and full results are posted at www.cruising.org. Wild said he assessed all cruise data worldwide, not just that involving CLIA member lines, although those comprise most of the business.

The study used 36 publicly available sources, including government data, trade publications and media reports. Every incident was identified and validated across two sources.

'When looking at the total of both significant and minor operational incidents, the absolute percent change between 2009 and 2013 was a decline of 13%, as industry capacity increased 18% during the same period,' Wild said.

The cruise industry's safety record is as good or better than that of the airlines, the study found.

In 2011, when there is the most recent comparable data across transport sectors, the incidence of passenger and crew fatalities on a cruise was one of the lowest with 0.08 per billion passenger miles compared to 0.16 among world airlines, 0.8 on US general aviation, 7.6 on US highways and 11.9 on US rail, the study found.

There were 102 'significant operational incidents' involving cruise ships over the five-year period. These were defined as causing more than 24 hours' delay or passenger or crew injuries or fatalities. There were 50 deaths (31 passengers and 19 crew) and a total of 215 injuries from these incidents.

In the same five-year period there were 101 'minor operational incidents,' defined as causing a ship delay of less than 24 hours or minor injuries to passengers or crew.

While persons overboard have received widespread coverage, leading to the  impression that numbers are on the rise, the data showed they're actually declining, from 23 involving passengers and crew in 2009 to 12 in 2013. The total number of overboards during the five-year period was 96. Eighty of those were fatal.

'The thing that was unexpected, and good to see, is that the amount of people overboard who were rescued—a very difficult thing—grew about 20%. That's commendable,' Wild said.

'It's really good to have an unbiased, completely factual analysis to compare objectively with all our safety efforts,' added CLIA's Bud Darr, svp technical and regulatory affairs.