STX France to be known again as Chantiers de l’Atlantique 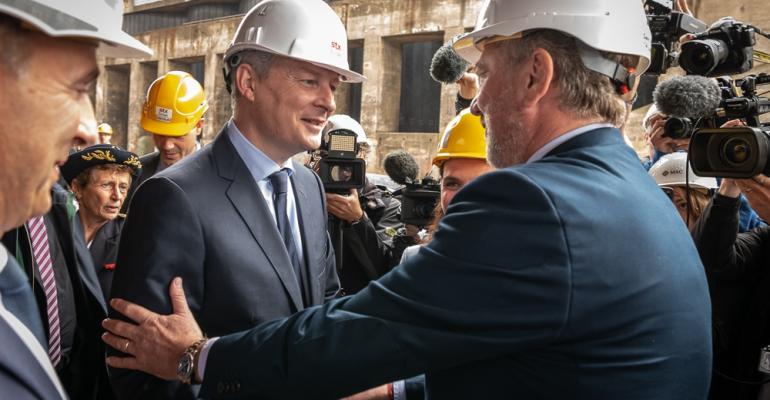 French Economy Minister Le Maire, left, is greeted by MSC Cruises' Pierfrancesco Vago at MSC Bellissima float-out in Saint-Nazaire
The Saint-Nazaire shipyard of STX France, which is moving closer to being under Fincantieri’s control, will be known again as Chantiers de l’Atlantique once the deal is complete.

This was confirmed on Thursday by Bruno Le Maire, French economy and finance minister, during his visit to the shipyard to attend MSC Bellissima’s float-out.

‘The yard will regain this beautiful and prestigious name,' Le Maire said.

He had already hinted that would be the new name last September when explaining the details of the agreement reached by the French and Italian governments that would see Fincantieri take control of STX France after the South Korean STX Offshore & Shipbuilding bankrupcy.

‘It is a symbolic promise from me and a subject dear to my heart,’ he added.

The name Chantiers de l’Atlantique was the property of Alstom, former owner of the shipyard until it was renamed STX France when acquired by STX Shipbuilding in 2008.

During MSC Cruises' multifacted event yesterday, Le Maire also reasserted his firm intention to finalise the deal with Fincantieri which is awaiting confirmation by the European competition authorities.

‘This is a strong agreement. I will meet next week with Giovanni Tria, my Italian counterpart, and we'll clarify the situation. I want to tell him again that this is a strategic deal, concluded by a state and that this should overcome political changes.

‘Governments change but the commitments made by states remain. I wish this one taken by the Italian state to remain,’ he concluded.

According to the minister, the French yard will have to be temporarily nationalized on June 30 or July 1 with the 66.6% stake held by South Korea’s STX repossessed (the French state owns the remaining 33.4%) until the European competition authorities grant their approval. Le Maire expects this to happen at the end of 2018 or beginning of 2019.