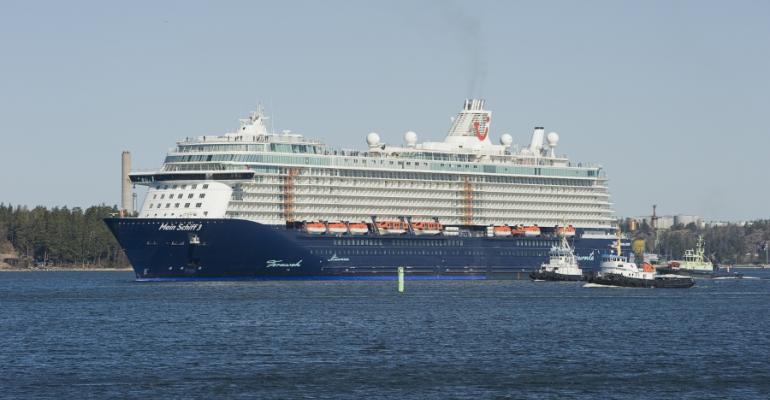 STX Finland handed over TUI Cruises' first newbuild, Mein Schiff 3, on Thursday, as the cruise line's chief called for action by the Finnish government on the Turku shipyard's future.

TUI Cruises ceo Richard Vogel expressed delight in seeing 'our ideas turned into reality' and praised the yard and newbuild team for producing what he called a standard-setting ship.

Then, he added: 'Within the context of our planned fleet expansion, we would highly appreciate the ongoing discussion by the government about the future of STX Finland to come to a positive outcome in the near future, securing the yard's ongoing operation.'

Months ago the main creditor for Korea's troubled STX Group expressed the hope of selling STX Europe, which includes the STX Finland and STX France, by June.

TUI Cruises has a sister ship, Mein Schiff 4, under construction that is scheduled to be launched in September and delivered in the spring.

Jari Anttila, deputy ceo of STX Finland, said the building period of Mein Schiff 3 was 'record-breaking tight,' adding: 'With good cooperation, high motivation and a lot of hard work performed by thousands of people representing numerous different companies, we were able to execute this project successfully.'

Production started in November 2012, and the ship was floated out in November 2013. The construction provided some 5,500 man-years of labour to the yard and the supplier network.

A prominent design feature is the diamond-shaped 167-square-meter diamond-shape structure at the stern of the ship. It extends over two decks and encloses the Große Freiheit (Great Freedom) space with specialty restaurants, such as the fine dining Richards - Feines Essen and the Steakhouse Surf & Turf, as well as a modern coffee house and an exclusive bar.

In addition, Mein Schiff 3 offers a wide variety of restaurants, bars and lounges, as well as a nightclub. It has a 25-meter outdoor pool, a large outdoor arena with an LED screen for sporting activities and cinema events, a three-deck theater and a concert hall with excellent acoustics.

Ninety percent of the cabins offer ocean views and 82% have balconies. There are 10 two-level suites with a private roof terrace, and special family cabins and spa cabins. The accommodations were built by STX Finland Cabins.

The ship will be named in Hamburg and is scheduled to begin its maiden cruise from Hamburg to Palma de Mallorca on June 13.