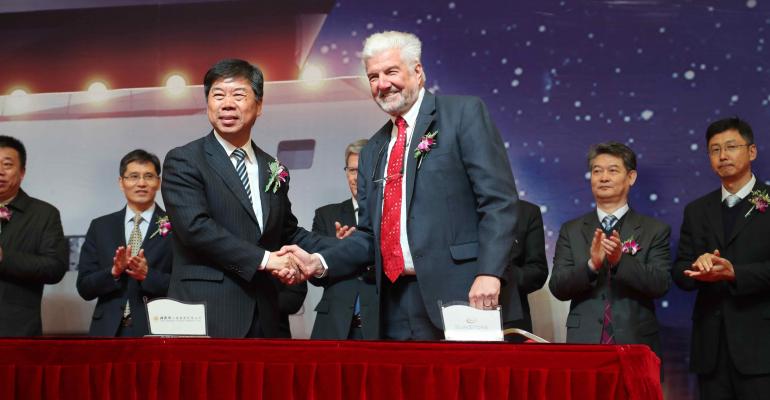 This second ship is scheduled for delivery in August 2020.

Charters lined up for third and fourth newbuilds

'While we aren’t yet ready to announce the long-term charterer of the second vessel, we are happy to report that long-term charter contracts have already been signed for the Infinity III and Infinity IV,' SunStone president and CEO Niels-Erik Lund said.

As a result of the enthusiasm for the first ship, the company is pursuing an accelerated development of the fleet.

The Infinity II contract was signed by Lund and David Zhu, director of China Merchant Heavy Industries. The 160-passenger ship will have a number of different features from Greg Mortimer—which is chartered to Australia's Aurora Expeditions—but is a sister from capacity and technical aspects.

The Ulstein X-BOW design will enable the ships to pierce waves with much greater stability than a traditional bow. Because less fuel is needed to get through the waves, this translates into greater efficiency and reduced air emissions.

This is part of a firm order for four vessels with options for an additional six. The newbuilds are 104 meters long, 18 meters wide and have 5.1-meter draft. Passenger capacity can range from 130 to 200, and crew capacity from 85 to 115. The design is for Ice Class 1A/Polar Code 6, with dynamic positioning and zero-speed stabilizers.

Greg Mortimer a ship of firsts for China

Ceremony attendees included the mayor of Haimen Municipal People’s Government, along with ministers and representatives from many other government authorities. The shipyard was represented by a large delegation of the top management from the China Merchants Group of companies. The group includes financial institutions such as China Merchants Bank and China Merchants Leasing, a company active in the leasing of commercial vessels.

Representatives from Infinity Project partners included Claude Maillot, SVP Bureau Veritas, and Lars Ståle Skoge, commercial director, Ulstein Design & Solution, the firm responsible for the ship's hull design and technical layout, including the entire equipment package purchase in Europe and the supervision of the installation. Sameli Lahdesmaki, CEO, Mäkinen, Finland, attended with a number of colleagues; Mäkinen is providing the Infinity interiors, including passenger and crew cabins, and all public areas.

Aurora Cruises was represented by one of the owners, board member Glenn Haifer, and by president Robert Halfpenny.