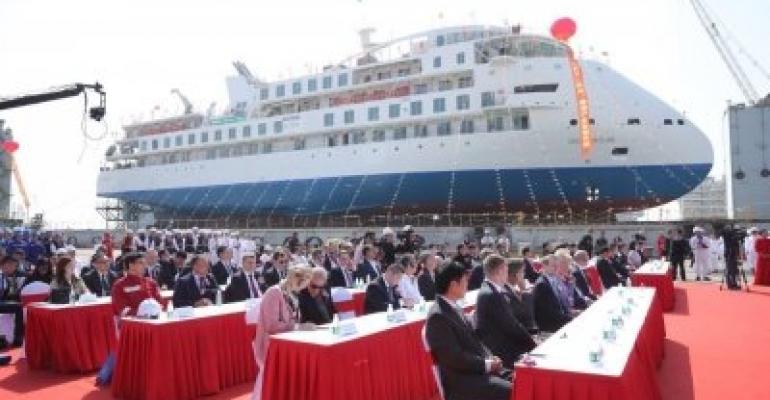 Greg Mortimer atop a barge prior to its float-out PHOTO: SunStone Ships
Greg Mortimer, the first Infinity-class expedition newbuild for SunStone Ships, was floated out at China Merchants Heavy Industries in Haimen.

Attending the launch were officials from SunStone and SunStone Marine Advisors and representatives of Australia's Aurora Expeditions, the charterer of the vessel, as well as Ulstein Design and Solutions, Mäkinen Oy, Tomas Tillberg Design, Bureau Veritas and Stephenson Harwood.

'We are extremely pleased that the Greg Mortimer is on time, built to spec and reflects the high-quality workmanship we expected. This vessel is the embodiment of many leaps forward in technology, safety and efficiency,' said Niels-Erik Lund, president and CEO, SunStone Ships.

'For SunStone, it is very exciting to see the first Infinity-class vessel in the water,' Lund continued 'This is the realization of a dream, and an opportunity to showcase our partners’ commendable work.'

Greg Mortimer is scheduled to begin cruising at the end of October from Ushuaia to Antarctica.

Simultaneous to the launch, the shipyard hosted the steel-cutting for Ocean Victory, which is chartered to Denmark's Albatros Travel, for Antarctica seasons, and to American Queen Steamboat Co.'s Victory Cruise Lines for summer season operation in Alaska.

Deliveries from August 2019 through August 2023

Deliveries begin with Greg Mortimer in August, and are scheduled to continue with the remaining nine vessels through August 2023. They're part of a 10-ship framework agreement with China Merchants Heavy Industries.

'We are very pleased with the relationship with China Merchants Group, and the development and speed with which we are signing these newbuild contracts,' Lund said.