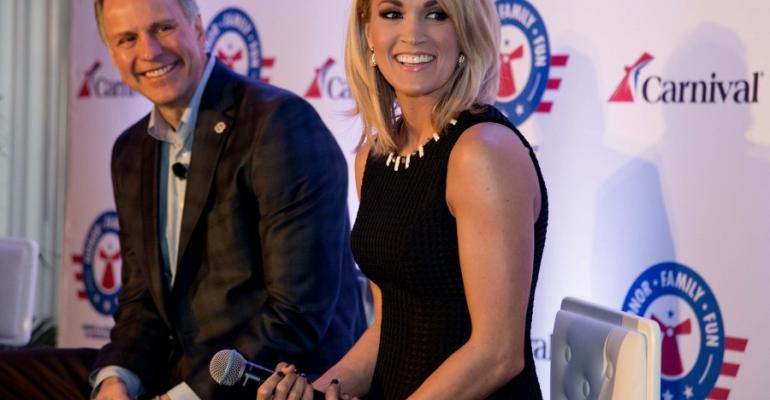 The year-long 'Honor. Family. Fun.' program will help raise funds for Operation Homefront, a national nonprofit organization that assists military families. The program will culminate in a private pierside concert for service men and women and their families starring Underwood. That will take place when the new Carnival Vista makes its US debut in New York City on Nov. 4.

'Military families represent a cornerstone of our country and we are honored by the opportunity to partner with Carrie and Operation Homefront to bring much needed awareness and aid to our troops and their loved ones,' Carnival president Christine Duffy said in annnouncingt the program at an event Thursday in Jacksonville, Florida.

In 10 cities along the course of Underwood’s The Storyteller Tour, which kicks off in Jacksonville on Saturday, military families chosen in partnership with Operation Homefront will get the chance to meet the singer before her concerts. A video series highlighting these meetings and the families’ individual stories will be featured on carnival.com.

Underwood said she's honored to join Carnival and Operation Homefront to 'lift up these soldiers and their families.'

Driving the effort to raise funds for the cause, Underwood fans and others will have the opportunity to donate by clicking on the 'Donate Now' button at carnival.com/HonorFamilyFun. Commemorative dog tags will be available for purchase at merchandise stands at all Storyteller Tour stops and on board Carnival ships with proceeds going to Operation Homefront.

In the coming weeks, Carnival will launch a new shipboard military appreciation program. Each ship will host a special event to recognize active and retired military personnel and their families that will kick off with a welcome video featuring Underwood.

It also was revealed the singer will join the Carnival LIVE! roster in early 2017 with details to be announced at a later date.