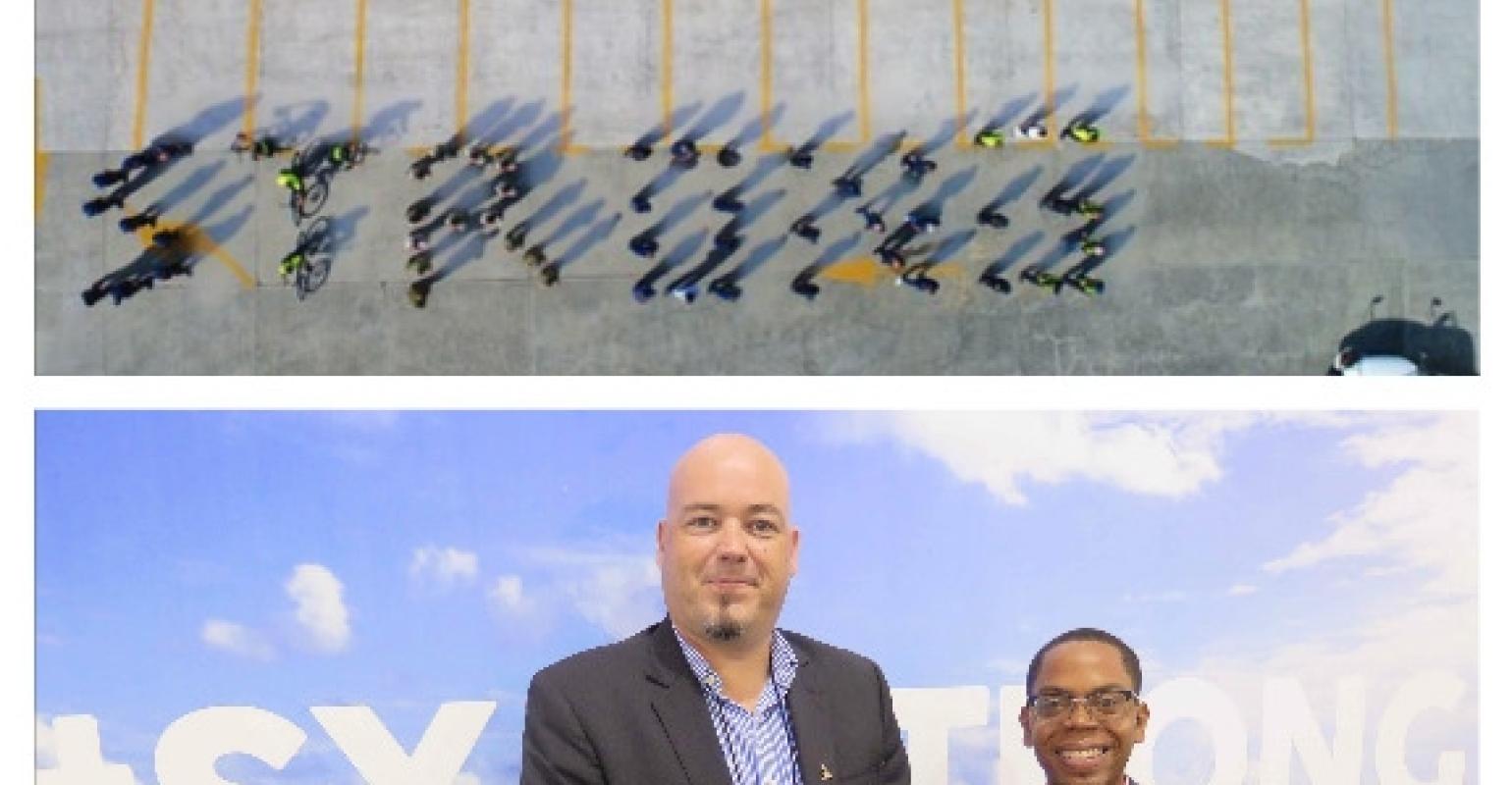 Top: #SXMStrong. Bottom, from left: Port St. Maarten CFO Ton Van Kooten and business development officer Alexander Gumbs at the recent FCCA conference
One of Caribbean cruising's most important destinations and one of the places hardest hit by Hurricane Irma is proving its mettle. It's summed up by the hashtag #SXMStrong.

According to port officials, more than 80% of St. Maarten's utilities are back, 70% of Philipsburg's Front Street is restored and the beaches are being cleaned and sanitized. Seventy percent to 80% of the water-based tours are ready, along with 55% to 60% of the land-based tours, with another 15% to 20% expected to be back up over the next three months.

The port itself is open to receive ships. Pier 1 sustained some damage to expansion joints, and concrete sections that were lifted by wave action are being replaced. By January/February all six berths will be ready.

Royal Caribbean International's Grandeur of the Seas is set to become the first cruise ship back on Dec. 17, and Carnival Cruise Line will resume calls starting Jan. 15 with Carnival Sunshine.

Lines have to be very careful when making the decision to return, and St. Maarten needs to be ready. It's a 'marquee port,' explained Ton Van Kooten, CFO, Port St. Maarten. 'The last thing we want is to damage the image.'

Tourism stakeholders united in a strong representation at the recent Florida-Caribbean Cruise Association conference in Mérida, Mexico. The first focus was B2B communication; it was important to meet with cruise executives there face to face, Van Kooten said. The next focus, he added, will be consumers.

That's why St. Maarten became the first destination to partner with the FCCA for the association's million-dollar media campaign, 'The Caribbean Is Open.'

'They have worked around the clock to reopen for tourism, and we look forward to showcasing those actions, along with the amazing products and friendly smiles awaiting visitors, to help inject a needed economic boost,' FCCA president Michele Paige said.

'We have worked tirelessly to reopen our shores to welcome visitors back to St. Maarten,' Minister of Tourism Mellissa Arrindell-Doncher said, 'and this campaign will get our message out to the world that we are ready.'

Since the cruise business is so vital, Port St. Maarten has helped take the lead in driving tourism recovery, especially since hotel capacity is down 20% to 30%. Gumbs described a 'great collaboration with our government.'

Irma had a 'profound impact on our entire country,' Van Kooten said. 'What stands out is the resilience of the people. We said "Don't sit and cry. Get on your feet and do it." The cruise business is vital to St. Maarten. Everyone understands the sooner it comes back, the better.'

Gumbs expressed St. Maarten's gratitude for the relief efforts and support of its cruise line partners and said the destination wants to ensure it exceeds their expectations.

'We were a benchmark destination in the Caribbean and we will return better than before,' he vowed. 'This is an opportunity to make our product better.'

Some stores might change out, some restaurants may be upgraded and some new tours are coming on line. Gumbs noted up to 30% of the passengers arriving by ship may have already visited St. Maarten, so this is a chance to offer something fresh.

Plus, a major new attraction, Rainforest Adventures' Rockland Estate eco-park with what's touted as the world's steepest zip line and a chairlift adventure, is opening this month.

It's important the world knows how far St. Maarten has come.

'What you saw two months ago [on the news] is not what it is today,' Van Kooten said. 'It's like a different place. Slowly but surely we're getting our message out.'