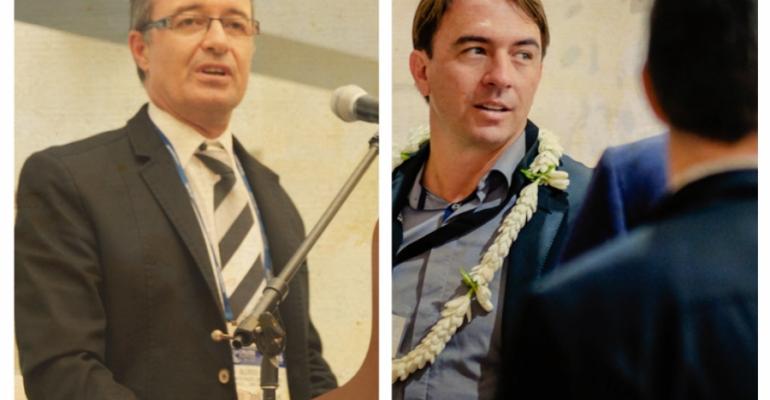 Ollivier Amaru, founding president of Tahiti Cruise Club, expressed satisfaction in accomplishments during the past two years as a new president takes over.

Bud Gilroy, a maritime agency director who once worked for Renaissance Cruises, was elected to the post. Amaru remains president of the South Pacific Cruise Alliance and will continue activities to develop the cruise business in the area.

Born in Papeete, Gilroy worked for Renaissance in 2000. He became assistant manager at Transit Sat Nui, then director of the maritime agency Fare Ute.

'The Tahiti Cruise Club is and must remain a permanent force of expertise, consulting and marketing, an effective tool made by and for all players of the cruise sector in French Polynesia,' Gilroy said. He would like to focus on educating people about the many contributions of the cruise business, working with the stakeholders of each island and helping to identify priority actions that benefit the entire sector.

According to the Tahiti Cruise Club, French Polynesia's cruise sector has generated more than 10bn French Pacific francs per year in economic benefits over the last two years. Since 2012, the number of calls and passenger days have doubled.

Amaru noted that between 2012 and 2015, the cruise sector had grown more than 20% per year. He added there's no assurance such dynamics will continue and said there is much to do, but the 'cohesion of all stakeholders, policy makers, public and private, in recent years is a very positive sign that strengthens our determination.'

Gilroy was elected at an extraordinary general assembly of the Tahiti Cruise Club in Papeete’s Town Council.

In consultation with Tahiti Tourisme and the Ministry of Tourism, marketing actions to cruise lines reflect a united destination with the conviction to explore opportunities for the next three to five years.

By improving infrastructure in the different islands or building an international cruise terminal—still under consideration—French Polynesia is significantly driving progress, fostering efficiency and working through regulatory obstacles, according to the Tahiti Cruise Club.

The first South Pacific Cruise Forum took place in Tahiti last October with the attendance of many international speakers and more than 15 South Pacific states and territories.

A delegation of 15 public and private sector officials plan to attend Seatrade Cruise Global in Fort Lauderdale next month and will exhibit in the trade show at Booth 1309.