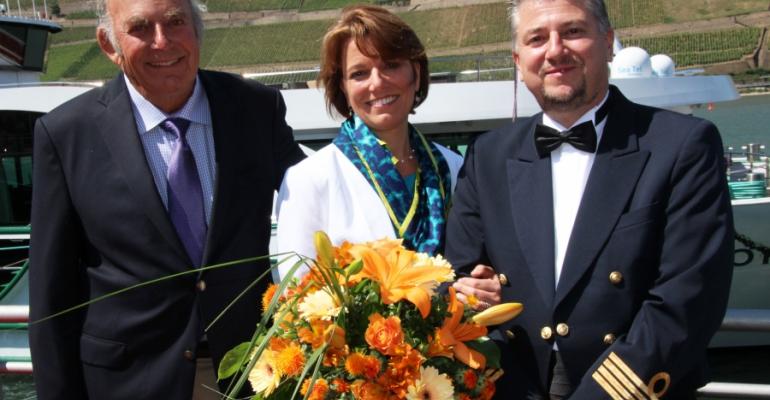 Some 20 members of the Tauck family spanning three generations joined Tauck company executives, media, special guests and local dignitaries in Bingen am Rhein, Germany, on Saturday for the naming of new riverboat Savor.

Liz Tauck Walters, a company director and daughter of chairman Arthur Tauck Jr., served as the godmother, reciting a traditional blessing and cutting a ribbon that sent a bottle of champagne crashing against the ship's hull. A brass band played, a fireboat shot plumes of water and the area's reigning Wine Princess rang Savor's bell.

This year the company's river capacity grew a total of 55%.  European river cruising continues to be the fastest growing segment of Tauck’s business.

Savor and Inspire comprise Tauck’s new Inspiration-class ships, and join the four Jewel-class vessels, Treasures, Swiss Jewel, Swiss Sapphire and Swiss Emerald. Like the Jewel-class ships, the newer vessels carry fewer passengers and more service staff than ships of the same size operated by other river cruise lines. The 443-foot-long Inspiration-class ships carry 130 passengers, compared to the typical 190 passengers. And where other lines have one cruise director, Tauck staffs each ship with a Tauck cruise director and three professional Tauck directors.

Also notable on the Savor and Inspire are the eight 'loft' cabins located on each ship’s lower (Emerald) deck. These 225-square-foot accommodations have a raised platform seating area located against the hull with a higher ceiling that allows for a much taller window than can normally be incorporated into lower-level cabins. The middle portion of this window can be opened electronically for fresh air.

Each Inspiration-class ship also has 22 suites of 300 square feet, with two French balconies, a pull-out couch, roomy walk-in closets with built-in drawers and a spacious bathroom with rain shower. Along with the suites, the newbuilds have 32 cabins of 225 square feet, plus an additional 13 cabins ranging from 150 square feet to 190 square feet. Four of the 150-square-foot cabins are for solo travelers.

For 2014, Savor will sail on two Tauck itineraries, the 12-day 'The Blue Danube' and the 10-day 'Danube Reflections.'