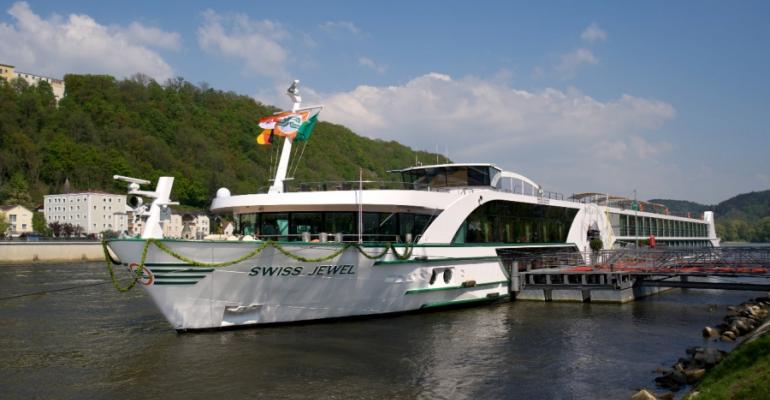 Capacity will go from 118 passengers to 98 on five boats, including Siwss Jewel

Tauck outlined a sweeping plan to reconfigure more than half of its European river cruising fleet over the next two years. The company's five Jewel-class boats will get larger cabins, while passenger capacity will be reduced, and each vessel's second dining venue will get upgraded.

The most dramatic enhancement will take place on the Ruby (middle) Deck, where 30 150 square-foot cabins in the current configuration will be replaced with 20 cabins measuring 225 square feet each. Aboard each reconfigured vessel, 69% of all cabins will then measure 225 square feet or more.

In addition, overall capacity will be reduced from 118 passengers to 98, with the total number of cabins on each vessel going from 59 to 49. Tauck will continue to staff each ship with a Tauck cruise director and three Tauck directors.

On the Diamond (upper) Deck of each reconfigured vessel, the second dining venue, The Bistro, will be upgraded with its own dedicated kitchen and chef. The Bistro will be renamed Arthur’s, in tribute to company founder Arthur Tauck Sr., and its expanded menu will continue to provide more casual alternatives to the fine dining selections offered in the main Compass Rose restaurant. Tauck introduced a second dining venue in 2006 aboard Swiss Emerald, and the dedicated kitchen and Arthur’s name are enhancements already included on Tauck’s 135-meter boats.

Tauck ceo Dan Mahar said the changes to the Jewel-class vessels will put them on equal footing the new Inspiration-class ships. Going forward, the Jewel- and Inspiration-class distinctions will be abandoned. Instead, Tauck will refer to its ships collectively as the Tauck Destination Fleet to reflect the focus on delivering a superior destination experience.

Tauck is also adjusting its deployment strategy. On longer cruises including a transit of the Main-Danube Canal, Tauck will deploy 110-meter boats because their shorter length allows for greater efficiency and flexibility when passing through the many locks. Tauck will also continue to position two 110-meter boats in France, Swiss Sapphire on the Seine and Swiss Emerald on the Rhone/Saône, where their modest length makes docking easier in France’s smaller or more crowded ports like Paris. The four 135-meter vessels will be assigned to itineraries specifically on the Danube, or on the Rhine and Moselle rivers.

Besides launching the new 135-meter Grace and Joy in the coming months, Tauck is introducing a new 10-day Rhine cruise. And for 2016, the company has reduced its prices by up to $1,200 per couple based on foreign exchange savings it’s passing along to travelers.