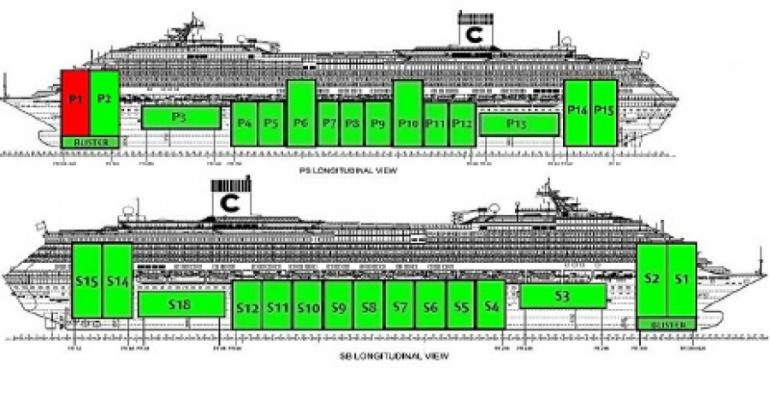 With the installation of Concordia's last sponson completed, testing for the wreck's refloating in an estimated 10 days has begun.

'Following installation of the last sponson, we can start the countdown to refloating and final departure of the wreck from Giglio Island,' Costa Crociere ceo Michael Thamm said. 'Now all our energies are focused on the successful conclusion of this unprecedented engineering challenge to respect a precise commitment: remove the Concordia wreck as soon as possible, in compliance with the highest environmental and safety standards.'

After the Titan Micoperi team tests the systems, the Monitoring Observatory needs to give the green light before the refloating can proceed.

The last of 30 sponsons, P1, was affixed to the wreck Thursday afternoon in Giglio.

When the refloating operation begins, a pneumatic system will gradually empty the ballast water from the sponsons, providing buoyancy to the wreck, which is resting atop a platform secured to the seabed. After the refloating, approximately 18.5 meters of Concordia will remain submerged.

The wreck will then be towed to Genoa for dismantling and recycling.

Since the tow will be within Italy, the semi-submersible heavy lift ship, Dockwise Vanguard, that had been secured as an alternative in the case of long distance transportation, will not be needed, a Costa spokeswoman told Seatrade Insider.

A general outline of the removal plan is here, with more precise details expected in the coming days.