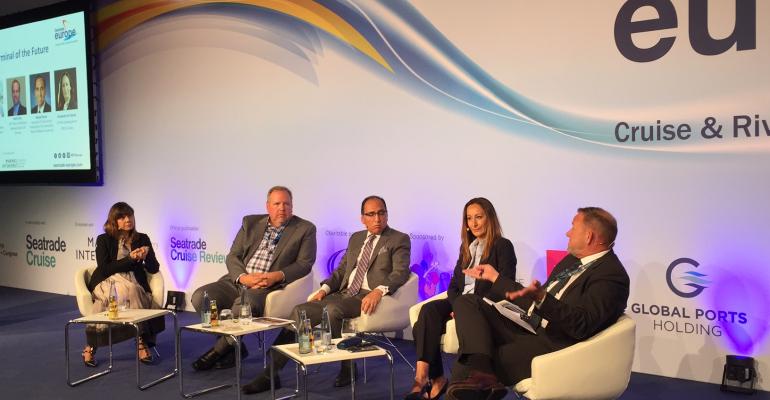 The application of new technologies including biometric facial recognition and new types of security scanners will increasingly drive passenger terminal designs and increase both efficiency and passenger satisfaction, a panel of port infrastructure experts and cruise line representatives concluded at Seatrade Europe on Thursday.

New technologies and streamlined passenger flows are though much easier to implement at terminals dedicated to one specific operator than in facilities used by a variety of cruise lines.

A controversial issue is the question how much potential for optimisation the handling of provisions and luggage bears: Cruise line representatives say that theoretically possible advancements would be extremely expensive to implement.

Different priorities according to ship style and size

In contrast, the optimal design of a terminal continues to depend much on local conditions, the size and style of ships to be handled, and the question if a facility is to be used by multiple operators or just one key account.

Giving an insight into the philosophy behind Miami's new Terminal A, Miguel Reyna said the top consideration has been to achieve a streamlined processing of guests to ensure a continuous passenger flow with the time spend between curb and gangway being less than ten minutes.

Cutting edges implemented to achieve this include, according to Reyna, a mobile check-in instead of traditional desks, biometric facial recognition, self-security check-in and self bag drop. He said keeping passengers moving had been a top priority as the terminal was designed, even to the extend that no retain facilities were fitted in order to avoid slowing down the flow of guests.

A comparison between PortMiami’s Terminal A and Istanbul's new Galataport revealed great differences, owing much to a different surrounding and the fact that Istanbul's new facility is going to be used by a wide variety of operators.

Ayan highlighted the fact that the new facility due for inauguration in 2020 – comprising a 20,000 square metres terminal building as well as 9,000 square metres port area, which replace an old 6,350 sqm terminal – will pioneer with an innovative solution bringing most of the required facilities underground in order to keep the seaside promenade unobstructed and open to public use once no ship is in port.

The extensive terminal area, comprising among others 100 check-in desks along with lengthy conveyor belts and 32 passport control desks, is located in a mezzanine floor beyond the ground. Three basements below are dedicated to bus terminal and carpark.

Up to three cruise ships will be handled at the new Galataport terminal simultaneously, Ayan said, with operations divided into an A and a B section. If two operators are in port, one will be assigned section A and the other section B. 170 hatches along the pier provide access to the underground terminal which makes, in contrast to many existing terminals, horizontal and vertical use of the available space.

Ayan said the new facility is part of a newly designed district comprising among others 200 shops and 35 cafes and restaurants. The Galataport terminal itself has been designed to handle 1.5 million passengers and crew annually, mainly during Istanbul's seven months core season. Ayan said that, in contrast to Terminal A in Miami, Galataport will be tailored to serve a great variety of cruise lines having very different styles, operational schemes and passenger demographics. As a result, check-in desks, which are already deemed superfluous in other places, continue to be indispensable at Istanbul.

Terminal of the future could be smaller

Ittel, who has been involved with numerous destination development projects, claimed new patterns to maximise the utilisation of terminals and terminal areas – as seen in Istanbul – constituted a key to the exploration of the terminal of the future. He said higher use can improve the economics of a terminal dramatically.

He also claimed technology will become an even stronger driver of terminal design in the future, and could – mainly due to automated processes – actually make future terminals smaller despite increasing ship sizes.

De Nardo stressed it was important to keep terminals flexible in order to be able adopting them to new technologies and trends as well as changing patterns of behaviour, keeping in mind a terminal constitutes an asset to be used over several decades.

An aspect agreed by the panel in that context was the difficulty to assess the long-term need for parking spaces near a facility, given a likely trend towards reduced individual mobility and increased usage of share solutions.

According to Reyna, Terminal A has already been designed to minimize the use of private vehicles and to maximise the use of private ride services. The panellists also agreed that sustainability is a key factor for any new terminal, mainly with regard to design efficient energy management systems and usage of sustainable materials, but also regarding the availability of shore power and LNG.

Ittel claimed there continues to be enormous potential for the advancement of shore-to-ship handling processes of luggage and provisions, saying these were ‘handled in an archaic way, just as they were loaded a century ago’.

He suggested RoRo style systems could be applied, allowing to drive pre-commissioned trailers or containers directly onto the ship (as it is in fact already done on some cruise ferries).

Ittel also suggested a direct connectivity between ships and terminal building baggage systems to be developed. While conceding the theoretical efficiency optimisation potential of such solutions, de Nardo pointed out that respective solutions would be very expensive to implement and could in fact cost onboard space today used elsewhere, for example for additional cabins. She suggested the focus should rather be on the optimisation of shoreside processes.