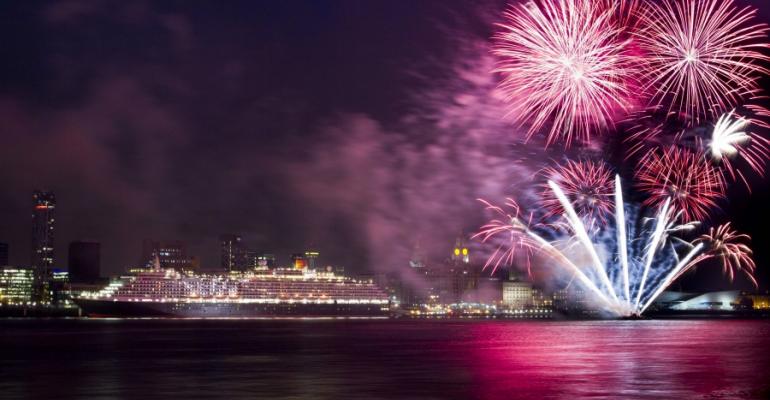 A spectacular and rare two-day call by Cunard's Queen Victoria at its 'spiritual home' of Liverpool had a rousing send-off with an estimated crowd of twenty thousand people lining the Mersey to see the ship sail.

Queen Victoria made the first overnight call at Liverpool by a Cunard ship in nearly 50 years over May 30-31 to celebrate the 100th year to the day of the maiden voyage of Aquitania, acclaimed as the most striking four-funnelled liner ever constructed and known as the 'Ship Beautiful', which sailed from the very same Liverpool berth on May 30, 1914.

Queen Victoria's two day stay began in dramatic fashion with fly-board champion Jay St John zooming 50 feet up in the air, propelled by two water jets attached to his feet, to exchange salutes with the Cunard Commodore at the ship's bow.  The fly-boarder also entertained disembarking passengers and the crowds of people along the dockside who had come to see the ship arrive.

A full day of visits and special events on board the ship to mark the Aquitania anniversary culminated with a fireworks display against the backdrop of the city's Three Graces, the Royal Liver Building, the Port of Liverpool Building and the Cunard Building, where the company had its headquarters for over 50 years until 1967 and which was especially illuminated for the evening, which together form a UNESCO World Heritage site.

Celebrations continued on May 31, the second and sunny day of the call, and huge crowds began gathering along the waterfront as Queen Victoria prepared to take her leave.  A quayside performance by local opera singer Danielle Thomas brought the visit to a climax as the ship sailed at 4pm to waves and cheers from the 20,000-strong crowd.

Cunard will mark its 175th anniversary in 2015 and all three Cunard Queens will sail together on the Mersey for the first ever time on May 25, 2015 as part of the company's year of celebration.

Commodore of the Cunard fleet and Master of Queen Victoria Christopher Rynd said: 'Having now had the privilege of bringing of all three ships of the current Cunard fleet into Liverpool I can say that the overnight visit and the send off given by the people of that great city to Queen Victoria was truly first class and will live long in the memory.   I am looking forward to 2015 and our 175th anniversary celebrations when all three Cunard ships will gather on the Mersey.'