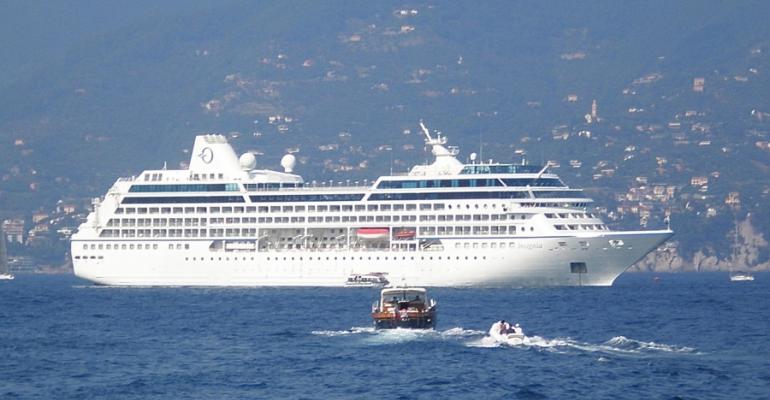 Three workers have died in an engine room fire aboard Oceania Cruises' Insignia. The blaze broke out Thursday morning when the ship was alongside at Port Castries, St. Lucia. It was contained and extinguished. All passengers safely evacuated the ship.

Three crew members and two contractors who were working on board were transferred to a local medical facility. The contractors and one crew member, believed to be an engine room crewman, died.

Late Thursday one crew member remained in hospital and was reported to be stable.

Passengers were being accommodated at local hotels prior to charter flights Thursday evening. Oceania Cruises president and chief operating officer Jason Montague and a care team are on site.

'Our top priority is ensuring all 656 guests return home as quickly and comfortably as possible,' the company said in a statement. Oceania Cruises organized charter flights to Miami, as well as transfers and hotel accommodations in Miami until flights to passengers' city of origin can be arranged Friday.

'We are deeply saddened by the tragic events that occurred this morning on Insignia,' the statement said. 'We have extended our heartfelt condolences to the families of those involved and are offering them our full support. This is truly an emotional time for all of us at Oceania Cruises.'

Insignia was on a 10-day cruise that sailed from San Juan Dec. 7 and was scheduled to arrive in Miami on Dec. 17.

The Marshall Islands registry will be leading the incident investigation, and it is understood the registry has agreed to the US Coast Guard and the National Transportation Safety Board joining the investigation as a substantially interested state.

The 1998-built ship had rejoined the fleet in May following an extensive drydock upgrade in Marseille. This came after a two-year charter to Hapag-Lloyd Cruises. Insignia was the first of Oceania's three original sister ships to undergo refurbishment in a program that totaled $50m. Nautica and Regatta subsequently received similar enhancements.

Insignia passengers will receive a 100% refund, and a 50% credit toward a future voyage.