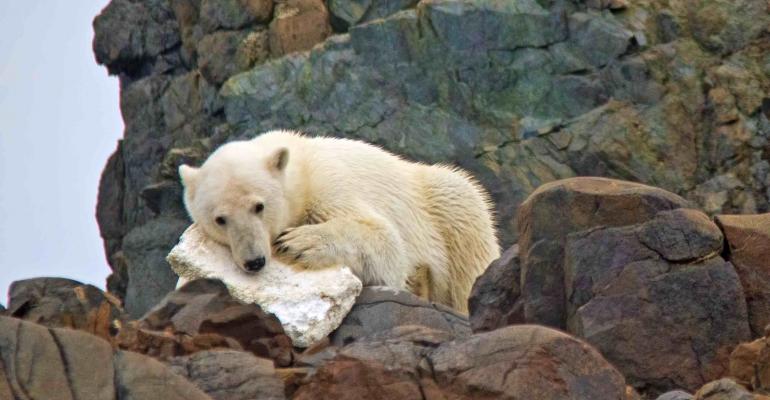 'Photos of polar bears chewing on Styrofoam send a strong message about how important it is that we change our habits,' Sarah Auffret said

As the Arctic cruise season draws to a close, the Association of Arctic Expedition Cruise Operators looked back on the results of the summer’s efforts to combat marine plastic pollution.

AECO’s environmental agent Sarah Auffret has been working with cruise operators to identify ways to reduce the use of disposable plastic on ships. AECO’s UN-affiliated Clean Seas campaign also focuses on enhancing the involvement of expedition cruise passengers in Arctic beach cleanups.

According to Auffret, people are becoming more and more aware of the problem of marine litter.

'The project is about cutting down on single-use plastic and cleaning up litter that has already found its way to the ocean, but it’s also about educating people. Photos of polar bears chewing on Styrofoam send a strong message about how important it is that we change our habits,' Auffret said.

AECO’s efforts to change attitudes and address the problem are already yielding results. Auffret is impressed with what has been achieved in a just few busy months.

'I’ve visited 21 ships and witnessed the changes they are making, for example by installing water dispensers to get rid of disposable water bottles. We’ve also seen that our members are making great contributions on the cleanup side of things. We know that at least 127 cleanups were completed by expedition cruise ships this summer, often in remote coastal areas where they can make a big difference. Fishing nets and other debris can have devastating effects on local wildlife and every cleanup counts,' Auffret said.

However, cleaning up waste is just one step in a larger effort to understand and address marine litter.

'Our members are helping document the distribution, composition and origin of the waste that they collect,' Auffret said. 'This information can give researchers valuable insight that ultimately will help us beat plastic pollution.'

So far this summer, the combined cleanup efforts in Svalbard have collected over 40,000 kilograms of marine litter. This impressive number is the result of volunteer efforts of AECO members, Svalbard’s local sports association, governor of Svalbard volunteer cruises, the Norwegian Coast Guard and even the Norwegian royal family.

'In addition to larger fishing nets and other objects, our members are doing an impressive job of picking up small pieces of plastic that litter the shore of so many beaches. It’s tedious work, but it’s important to remove it before it breaks down to microplastics and enters the food chain,' Auffret said.