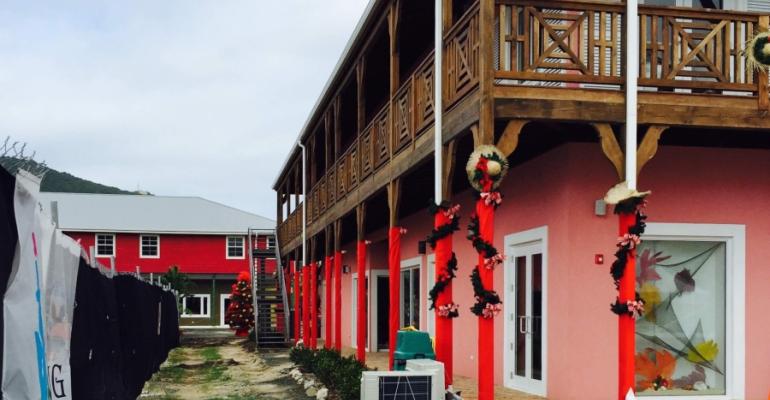 Tortola Pier Park, the large landside development going up adjacent to the British Virgin Islands' expanded cruise pier at Road Town, is not ready. Though the facility is open to the public, the grand opening planned for Dec. 22 was postponed until Feb. 16. The British Virgin Islands Ports Authority chairman of the board has resigned.

The Ministry of Communications and Works apologised to the public and the participants for any inconvenience.

Hugh Darley of Orlando-based IDEA Inc., the project/vision planner for Tortola Pier Park, visited the site on Tuesday and told Seatrade Cruise News 'there was no way the project would have opened today.' In his view, it may take months to complete.

In an update provided Monday to the BVI government by the Ministry of Communications and Works, it was stated that a restaurant development on the southwestern side of the facilty and a floating dock on the northeastern side are projected for completion by the first half of 2016.

Building No. 6, which is to house the flagship restaurant Margaritaville, is expected to be completed by June.

Work continues on the construction and opening of a shopping centre with provision for close to 60 stores, including retail, service providers, commercial spaces and space for offices.

The Ministry of Communications and Works said 72% of leases have been signed.

In a video update posted in early December, Tortola Pier Park project manager Dion Stoutt had said all hands were on deck in 'the last lap to finish buildings' before the planned Dec. 22 grand opening.

The pier expansion and Tortola Pier Park project were solidified with the signing of berthing agreements between the British Virgin Islands Ports Authority and Norwegian Cruise Line and Disney Cruise Lines on Jan. 17, 2014, to ensure a minimum of 425,000 cruise passengers visiting annually, for the next 15 years.

From October 2014 to December 2014, Tortola recorded 94,428 cruise passengers. For the same period this year, an 84% increase is anticipated, to approximately 173,369 passengers for the quarter.