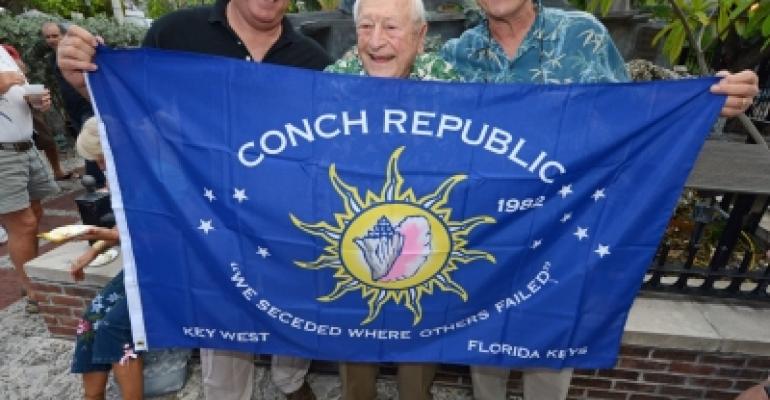 Stuart Newman, whose public relations savvy has buoyed leading cruise line and tourism accounts including Carnival, Holland America, Costa and the Florida Keys for decades, died Sunday in Miami. He was 96.

Newman died peacefully in the presence of family after being hospitalized for several weeks following a cardiac arrest.

'Stuart was a class act,' Carnival Corp. & plc chairman Micky Arison said. 'He lived a very full life and will be missed.'

Arison added he was surprised Newman was 96.

Perhaps that's because the founder and CEO of NewmanPR stayed active professionally and personally. He remained engaged and was still making valued contributions to the practice, and keeping a busy personal travel schedule, most recently sailing trans-Atlantic with wife Sandy on Cunard's Queen Victoria.

'Stuart’s contributions go way beyond the cruise industry. He really was a pioneer of South Florida tourism PR,' said Tim Gallagher, Carnival Cruise Line's former longtime public relations boss. 'With a detailed memory he was a great storyteller—and oh, the stories he could telll!'

An engaging raconteur, Newman was born to his chosen careers—journalism and public relations. He was known for inventive ways to tell his clients' stories and did that so well he retained clients for decades, his greatest pride.

For the Florida Keys tourism council, an account Newman's agency won in 1980 and still services today, he played a key role in the Conch Republic, which turned a potential tourism nightmare into a PR coup.

Nearly four decades ago, US federal agents set up a roadblock for traffic exiting the Florida Keys, to search for drugs and illegal alliens. Traffic backed up for hours, and the Key West mayor feared tourism and commerce would grind to a halt.

From his research, Newman knew the Keys had not joined the rest of the South in seceding from the US in the Civil War but stayed loyal to the union. He got the idea that if the Keys were being treated like a foreign country because of the roadblock, the islands could take a stand to make a point.

On April 23, 1982, in Key West’s Mallory Square, the Conch Republic seceded from the US in an elaborate, humor-laced ceremony that got worldwide attention and underscored the quirky personality of the Keys. Not long after, the roadblock went away.

A circus for Carnival Fantasy

For the introduction of Carnival Fantasy in 1990, the ship was late arriving from Europe due to bad weather. But Newman insisted the show must go on and avoided disappointing crowds that were going to turn out by transforming Watson Island, facing PortMiami, into a circus. The second ship in the series, Ecstasy, had to top that, so Newman came up with a fireworks extravaganza with the ship in the turning basin, an extremely complex and, at the time, novel idea. It went off spectacularly, and Arison, a man of few words, said: 'Great job,' praise Newman never forgot.

Carnival had deep trust in him. For another event, Arison asked how to position a ship. Newman replied: 'Micky, it's your cruise line. Why don't you tell them what to do?' Arison said: 'But you're handling the PR, Stuart.'

'He was a good and honorable man who supported our event from the moment it moved to Miami,' UK-based Seatrade chairman Chris Hayman said. 'I know he had a fondness for this country, which goes back to his days with the US Air Force during World War II.'

Indeed, Newman flew 35 missions as a bombardier and navigator. In 1945, while over Germany on a bombing foray, his B-17 took so much flak (enemy gunfire) that it crash-landed in Belgium, a wreck. The crew was rescued from approaching Germans by British troops, 'and three or four days later, they all cimbed back into a plane to continue the fight,' son Andy Newman said.

Andy, who followed his father into journalism and PR, arranged to take him up on B-17 flights for his 80th and 90th birthdays, and had planned the same for his 100th. Newman often spoke to military groups, veterans and others, always stating: 'I'm not a hero. The guys who didn't come back are the heroes.'

In October, Andy accompanied his father on an 'Honor Flight' for veterans to war memorials in Washington, DC, where they were cheered every step of the way before a heroes' welcome by thousands, from schoolchildren to generals, back in Florida.

Newman was born in Chicago and his family moved to Fort Lauderdale when he was 3. He studied at the University of Florida and worked as a stringer for the Fort Lauderdale News, today the Sun-Sentinel. The war interrupted. In basic training, he convinced his sergeant the camp needed its own newspaper, which he produced. Back from Europe, Newman was assigned to the public affairs office for the Air Force at its hospital, housed in the Biltmore Hotel, Coral Gables. He graduated from UF with a journalism degree in 1946.

Newman's greatest strength was client relations, and he shouldered most of his agency's financial side of the business.

'He was very, very service-oriented. He instilled that in me,' said Andy, SVP of NewmanPR. 'The trademark of the agency has always been our commitment to media relations. You want to reach the client's goals but always looking at those through the eyes of journalists and, now, social media and influencers, always being extremely honest. Accuracy is very important, too. We're a tremendous resource for journalists because they know we're truthful. It's all about trust.'

Respected by clients and media

'I’ve met a lot of PR folks in my life but never one like Stuart,' said Gallagher, who recommended Carnival hire his agency 30 years ago. 'He was honorable, principled and loyal. He gave the profession a good name and gained the respect of his clients and the media alike. He understood that in the media relations business the only thing you have going for you is your credibility,' Gallagher continued. 'And in some 60-plus years of practice, he never lost his.

'To me, he was more than just a colleague; he was a mentor, a great friend and confidante—a class act. I will miss him.'

Newman was a Marco Polo member of the Society of American Travel Writers, the highest level, and he traveled the world. In 1991, he established the Stuart G. Newman Endowed Scholarship for aspiring public relations professionals at the University of Florida, where a conference room bears his name. He was president of the first Florida chapter of the Public Relations Society of America and one of the principal organizers of the Greater Miami Public Relations Association and the Greater Miami Chapter of the Society of Professional Journalists/SDX.

And he was a founding father of the Conch Republic.

'He loved to fish off the Florida Keys,' Andy said. He owned five boats over the years. HIs ashes will be scattered in the Gulf Stream off the Keys, according to his wishes.

Besides Andy, Newman is survived by wife Sandy of Miami Beach, daughter Cathy Newman, an author and former longtime National Geographic editor in Washington, DC; daughter-in-law Maria Newman; grandsons Michael Newman and Jeb Fain of Washington, DC, and Alan Newman of Miami; and sister Nancy Simons of Weston, Florida. He was preceded in death by his first wife Edith, the mother of Andy and Cathy.

Newman’s mother lived to 101 and he intended to beat that.

'After his 90th he decided he want to buy a good bottle of Bordeaux to lay down for his 100th. I helped him pick one out,' Gallagher said.

A celebration of life is planned for later.

In lieu of flowers, Newman can be honored via a scholarship fund for public relations students at the University of Florida. Make checks payable to the UF Foundation, P.O. Box 14425, Gainesville, FL 32604. Or contributions can be made to the Florida Keys Soldier Ride. Make checks payable to the Military Affairs Committee, P.O. Box 2519 , Key West, FL 33045. For both causes, note 'Stuart Newman Memorial' in the memo area of the check.