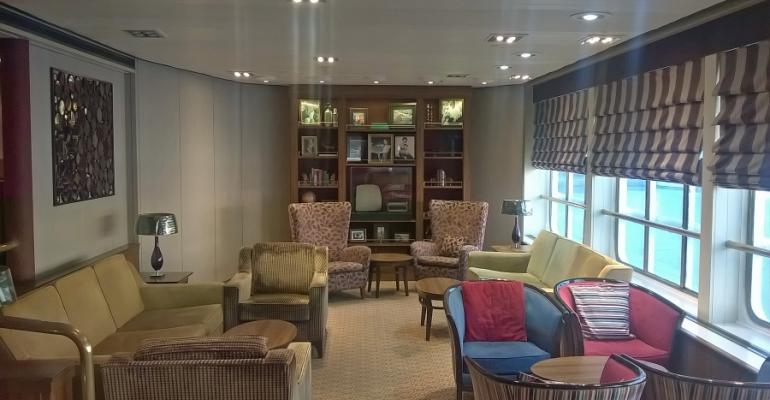 86 staff from Trimline met Thomson Celebration in wet-dock in Limassol, Cyprus to begin refurbishment as part of the cruise line’s modernisation strategy for 2015.

The ship’s Horizons bar saw the largest transformation, with soft furnishings from Trimline’s Southampton workshop updating the look and feel.

Further changes included re-upholstery of chairs plus the addition of new curtains, sofas and banquette seating. New carpet and deck heads were also installed leaving the space refreshed and bright.  In addition to this a new Amtico dance floor was also fitted.

Hemingway’s Bar had an electrical overhaul with new LED light replacement for energy efficiency and new electric sliding doors were fitted to the Lido deck to create an automatic exit and entrance.

A new stainless steel bar was fitted along with new white goods including dishwashers and ice machines as part of the conversion of the old Sports Deck to a new Sun Lounge area. A brand new canopy was also installed.

In addition, seven lifts were fitted with new flooring, panelling and deck heads and public toilets were redecorated with new tiling.

Andrew Richards, ceo at Trimline, said: ‘Working on Thomson Celebration has been a great example of how our teams can turn around large-scale refits in very short time frames. Heading into our 50th year in 2015, this is an aspect that will continue to strengthen our service in the years to come.’

Refurbishment of Thomson Celebration came in advance of completion of more extensive works to 55,000gt Thomson Dream in Gibraltar.

The187-strong Trimline team of joiners, fitters, furnishers, deck head team, plumbers, electricians and decorators, worked intensely, joining the ship as passengers disembarked in Malaga and leaving before the next passengers embarked in Lanzarote.

Reconfiguration work took place inside Dream where Trimline created four new guest cabins. The new cabins included new wet units, which were constructed and plumbed by Trimline, as well as additional furnishings and electrical work to the interior. New baths and bath panels were also fitted in a number of cabins.

The Broadway Show Lounge was refreshed with new carpet throughout, new curtains and re-upholstery on over 500 chairs and sofas. All fabrics and upholstery were made at Trimline headquarters in Southampton. On the same deck, the Lido Restaurant had new carpets fitted throughout.

Ocean Bar was re-carpeted and had the back bar optics replaced along with decoration to low level cabinets to smarten the bar’s appearance. The Photo Studio’s shutters were re-clad, painted and had new carpet and curtains fitted.

The Sunlounge Bar was fitted with a new stainless steel bar top and a full length canopy was installed to cover the bar seating for the comfort of passengers outside. Sirens Restaurant had 40sq mtr of flooring repaired along with new carpets, floor tiling, lighting and new roller blinds fitted to the servery.

On deck 11, the Terrace Grill had new shutters installed and the bar was re-clad with teak effect tiles. The deck heads were painted and new perimeter lighting was installed to provide ambient lighting effects for evening dining.

Seven lifts had flooring and deck heads replaced, new bulk heads, lighting and decoration and 19 public toilets were re-decorated and new marble tops, taps and toilet back boxes were installed.

Finally, the Shorex Desk and the Thomson Manager Office were given new Amtico flooring, banquet seating and new desks plus three multimedia pods were created and installed for passenger excursion bookings on-board.