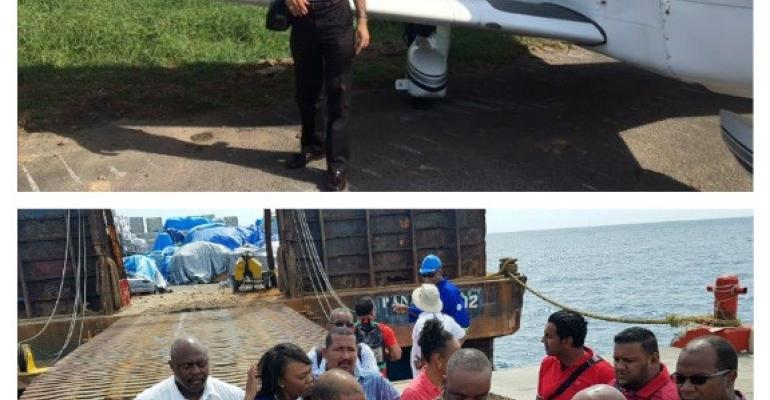 Charles Carvalho with his aircraft upon landing at Dominica's Canefield Airport and the barge of supplies being received by Dominica government officials
The hurricane-battered island of Dominica received millions of dollars worth of construction materials and other items for rebuilding from a Trinidadian businessman, with assistance from the CEO of Carvalho's Agencies, a ship's agent and tour provider.

The materials were delivered by a 5,000-ton barge to Roseau and handed over on Tuesday. The supplies are a private sector donation arranged by Inshan Ishmael, a Trinidadian television station owner.

Charles Carvalho, CEO of Carvalho's Agencies, provided his aircraft to fly Ishmael to Dominica to present the supplies to government officials, including Dominica's acting prime minister, who said the donation was the largest received, and Careen Prevost, permanent secretary of tourism and a coordinator of the island's hurricane recovery.

'We are doing all we can here in Trinidad to see Dominica back up as fast as we can, and the overall support from all Trinidad and Tobago nationals is overwhelming,' Carvalho said.

One of the earlier efforts involved Trinidad-based cruise ship Adriana's charter by ExLog Global, a disaster recovery organization working with the US Department of State on hurricane response missions, to evacuate US medical students from Dominica following Hurricane Maria.