Trondheim is moving with the times 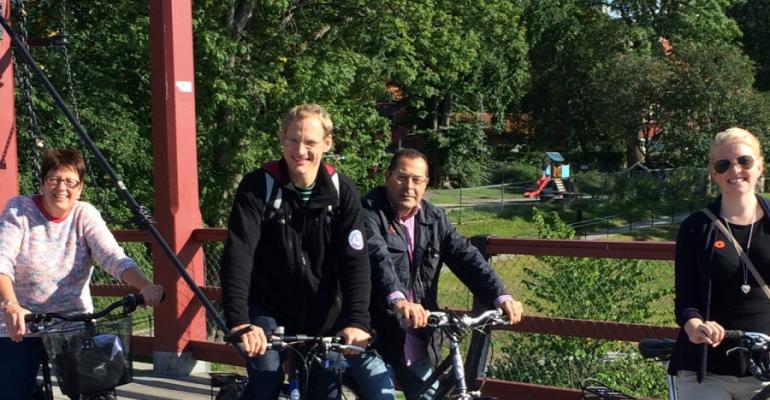 City sightseeing on two wheels is becoming popular in Trondheim

Trondheim, the historical capital of Norway, hosted cruise line representatives from the UK, Germany, Italy, France and the US today on Cruise Norway and partners 2014 site inspection.

The third largest city in Norway, which welcomed 60 cruise ships and almost 90,000 passengers this year, offers a variety of historical sights, museums and art galleries but with a small-town friendliness.

The city centre is a 15 minute walk from the city’s 98mtr long dedicated cruise berth which has taken ships as big as Queen Mary 2 and Adventure of the Seas alongside.

This year the port added a new 150 ton bollard at an investment of NKr1.2m to cater for the increasing size of vessels calling. Looking ahead, an evaluation plan to extend the quay to better cater for the new generation of larger cruise vessels is high up on the wish-list of Svein Kare Aune, Trondheim Havn’s harbour master.

Refurbishment work continues around the cruise quay with an additional bus parking area on the cards. Landscaping of the walkway to the bridge which opened in 2013, allowing faster and easier access for passengers into the city centre, will be finished in 2016, according to Kare Aune.

Future plans include floating pontoons close to the quay for mooring of harbour sightseeing boats to the nearby Monk’s Island, a former 11th century Benedictine Monastery which was converted into a prison and fortress and today is a popular tourist attraction with beaches and restaurant.

Costa and AIDA are the port’s most frequent callers with 13 visits and 8 respectively this year. MSC Opera has been a regular caller since 2013 and will call again in 2015. Holland America Line, another main customer,  called six times in 2014 and is visiting five times in 2015.

The port currently has 45 calls in 2015, according to Kirsti Ostensjo, cruise marketing manager.

She says the top attraction for visitors, is without doubt the city’s Nidaros Cathedral, originally built as a wooden chapel over the grave of St Olav in 1070. Today’s building dates back to the middle of the 12th century and is the most northerly Gothic cathedral boasting a stunning facade of richly ornamented stone sculptures. It is Norway’s national sanctuary where the country’s king is crowned. The Norwegian Crown Jewels are housed in the nearby Archbishop’s Palace.

Moving forward to today, the Rockheim is a new museum of Norwegian Pop and Rock music located close to the cruise quay. Ostensjo says, ‘this is often combined with a tour to Ringve Museum, the country’s national museum of music, housing instruments and artifacts from around the world.’

Growing in popularity for cruise visitors are kayaking along the Nidelven River, which runs through the city, walking and cycling tours as ways of seeing the sights in a more active way than a bus ride, notes Ostensjo.

Whilst transit calls represent the bulk of Trondheim’s cruise business, Pullmantur has successfully conducted four turnaround operations in the city in both 2013 and 2014 and Empress is set to return again for two turnarounds next year.