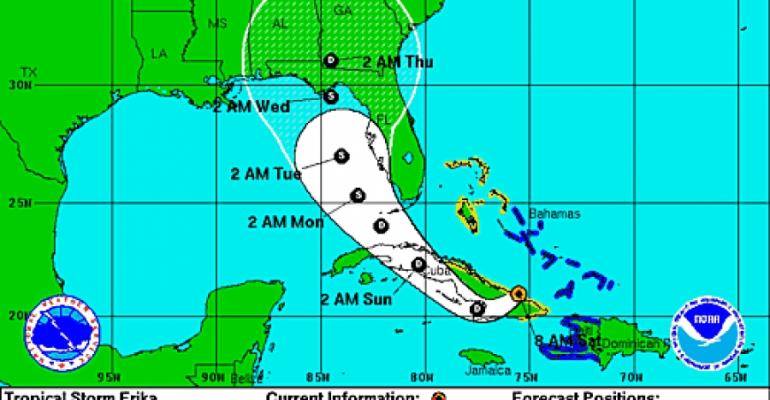 After Tropical Storm Erika passes over Hispaniola, it may weaken to the point where no watches or warnings for Florida are required, forecasters at the National Hurricane Center in Miami said Friday evening. That appeared even more likely on Saturday morning as Erika appeared to be dissipating, and its long-term path was projected moving away from the Florida peninsula.

In abundant caution, preparations to secure PortMiami and Port Everglades continued, and interests in the Florida Keys and South Florida were advised to monitor Erika's progress.

Some cruise itineraries have been adjusted.

Both PortMiami and Port Everglades were ordered to go to Condition X-ray at 1:30 p.m. Friday. This means preparations for the possible onset of gale force winds (39 to 45 mph/34 to 37 knots) within 48 hours. The US Coast Guard captain of the port was expected to set Condition Yankee at 1:30 p.m. Saturday.

On Friday Carnival Cruise Line made changes to four routes, and Royal Caribbean International moved one more departure earlier by a few hours.

Carnival Ecstasy's sailing from PortMiami on Friday will call at Nassau on Saturday from 10 a.m. to 5 p.m., instead of overnighting, and spend Sunday at sea. Port Canaveral-based Carnival Valor will drop Nassau on Sunday and spend a couple more hours in St. Thomas on Tuesday.

The Miami-based Carnival Breeze will substitute Grand Cayman for Grand Turk, Roatán for Curaçao and Costa Maya for Aruba. The itinerary will drop La Romana and add Cozumel. Carnival Fascination's five-day cruise from Jacksonville will drop Half Moon Cay and add a call at Freeport.

Royal Caribbean moved Sunday's departure of the Port Canaveral-based Freedom of the Seas a bit earlier, to 3:30 p.m.

Already on Thursday, Royal Caribbean had moved forward by a couple hours Sunday's departure of Port Everglades-based Independence of the Seas, to 3 p.m., and Norwegian Cruise Line had adjusted three itineraries for sailings on Friday and Saturday.

Royal Caribbean advised passengers sailing on Enchantment of the Seas and Majesty of the Seas to monitor www.royalcaribbean.com for any additional updates.

On Friday Erika was dumping heavy rains on the Dominican Republic. Maximum sustained winds were near 50 mph (85 km/h) with higher gusts.

The National Hurricane Center in Miami said weakening is likely as Erika moves over land and, as of Friday evening, the storm was expected to degrade into a tropical depression on Saturday. There is a possibility Erika could dissipate to a trough of low pressure during or after its passage over Hispaniola.

Tropical storm warnings were in place for the Dominican Republic, Haiti, southeastern Bahamas, Turks and Caicos and central Bahamas. A tropical storm watch is in effect for the northwestern Bahamas and the Cuban provinces of Ciego de Avila, Camaguey, Las Tunas, Holguin and Guantanamo. Interests elsewhere in eastern and central Cuba, the Florida Keys and South Florida were advised to keep an eye on Erika's progress.