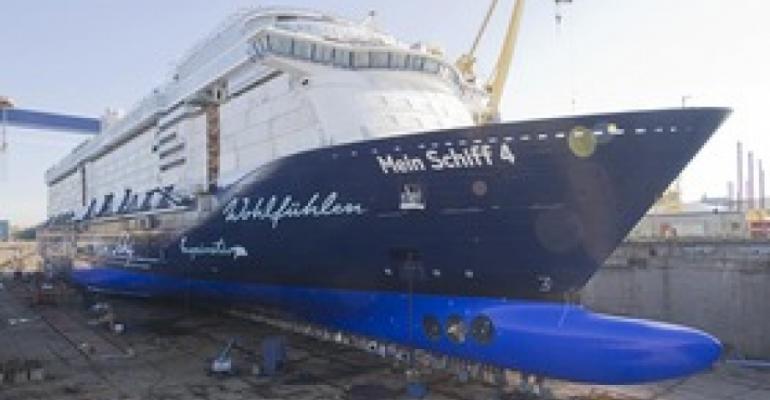 TUI Cruises is promoting two additional sailings for Mein Schiff 4 since the ship will be delivered ahead of schedule from Meyer Turku.

The two cruises will take place ahead of the June 5 christening in Kiel. The new so-called ‘test cruise’ will be reserved for customers who have sailed at least twice with TUI Cruises. Bookings will open Feb. 24.

The ‘test cruise’ is scheduled from May 22-25 as Mein Schiff 4 repositions from Hamburg to Kiel via Copenhagen. TUI Cruises has mailed a personal invitation to customers who travelled in 2013 and 2014, but irrespective of this invitation any regular customers with at least two cruises on record are able to book. Prices start at €398 per person for an inside cabin.

The Hamburg-Kiel itinerary has been designated a 'training voyage,' and a team from TUI's shoreside office will accompany the ship with service points set up on board to take passenger comments and feedback.

From May 26-31, a ‘preview cruise’ will take Mein Schiff 4 back to Hamburg. This sailing is available for anyone to book, starting at €648. Again TUI Cruises said it would closely focus on passenger feedback, which will be sought in a specially developed questionnaire.

Following this cruise, Mein Schiff 4 will take up its previously planned schedule. The christening is set for June 5 in Kiel prior to the official maiden voyage.