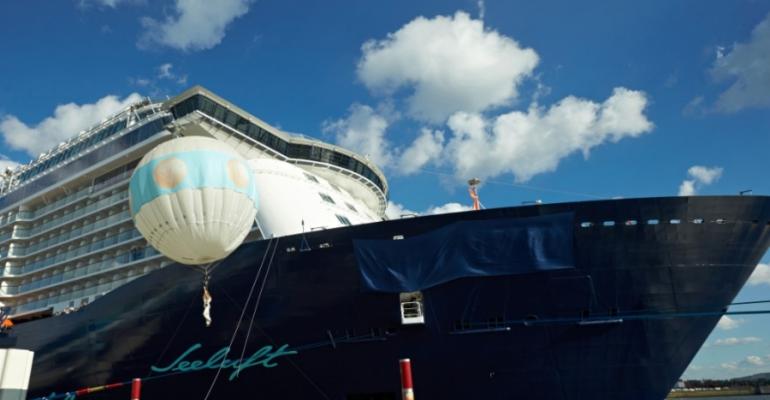 TUI Cruises' first newbuild was christened in Hamburg Thursday afternoon in a spectacular ceremony with 1,700 invited guests and tens of thousands of spectators. German singer Helene Fischer, the godmother, floated up to Mein Schiff 3's bow in a huge balloon to crack the traditional champagne bottle.

In the evening, thousands of people attended an open-air concert presented free by TUI Cruises and featuring artists including Fischer, who sang some of her most popular songs. At 10:30 p.m., fireworks illuminated the ship, berthed at the HafenCity.

Among the VIP guests were officials from the city of Hamburg and German figures from industry, entertainment and sports. 'The feedback we are receiving for Mein Schiff 3 is entirely positive,' said TUI Cruises ceo Richard Vogel.

Mein Schiff 3's christening was a highlight of Vogel's career. On Tuesday, he announced he will leave TUI Cruises later this year, to take up a new managerial position outside the TUI Group. His successor has been chosen but not announced.

Mein Schiff 3 will remain berthed at Hamburg overnight. Although the ship has already made several short cruises, mainly for travel agents, the official maiden voyage will start on Friday. The nine-day itinerary takes Mein Schiff 3 to Palma de Mallorca with calls at Le Havre, La Coruña, Leixoes, Lisbon and Cadiz.

TUI Cruises' new ship will then operate a butterfly itinerary from Malta to the Western Mediterranean and to the Adriatic Sea.

On the Adriatic route, Mein Schiff 3 will call at Italy's Brindisi, a new port for the line. Brindisi was known mainly as a ferry port for Albania, Greece and Turkey, and became one of the busiest ferry hubs in Europe during the 1990s. Traffic volumes declined significantly in recent years, so Brindisi has cultivated new business, including cruise tourism. Joining TUI's Adriatic itinerary was a major advance.

In mid-November, Mein Schiff 3 will switch to a winter itinerary using and Gran Canaria as a base. Weekly itineraries will alternate to Madeira, La Palma, Tenerife and Fuerteventura, and to Agadir in Morocco, La Gomera and Lanzarote.