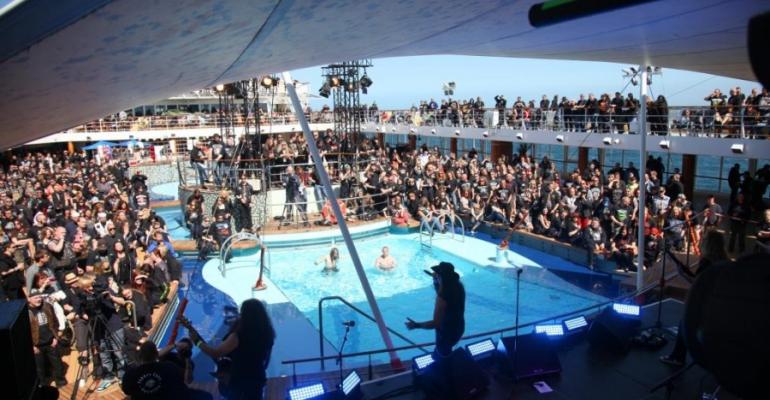 Extending its cooperation with ICS Festival Service, TUI Cruises will launch two music cruises on board Mein Schiff 1 next year.

'Sound Wave,' featuring popular German bands such as Santiano, Wingenfelder and Fools Garden, will take place Aug. 23-27, from Hamburg to Kiel with calls at Oslo and Copenhagen. After turning around at Kiel, Mein Schiff 1 will embark on its third 'Full Metal Cruise,' Aug. 27-31, to Copenhagen and Gothenburg before ending at Hamburg.

Both events will resemble shoreside music festivals with programs on board and in ports.

TUI Cruises and ICS Festival Service arranged their first 'Full Metal Cruise' in May 2013. A second heavy metal cruise is scheduled for April 11-16, round-trip from Palma de Mallorca to Barcelona and Ibiza.

When this second 'Full Metal Cruise' sold out in just two hours, TUI Cruises amd ICS Festival Service decided to arrange a second one in 2015, according to TUI Cruises ceo Richard Vogel. The bands and artists will be announced Aug. 20, when bookings open.

While the 'Full Metal Cruises' are tailored to heavy metal enthusiasts, the 'Sound Wave' program is designed for a broader audience and features popular German bands and artists such as Norman Keil, Paulsen, Baltic Sea Child, Tears for Beers and Nils Hofmann. Bookings open Aug. 28 with fares starting at €799 per person in inside double cabins and €1,099 per person in outside double cabins. The first 500 passengers will get a special shirt.