TUI Cruises takes delivery of Mein Schiff 5 ahead of schedule 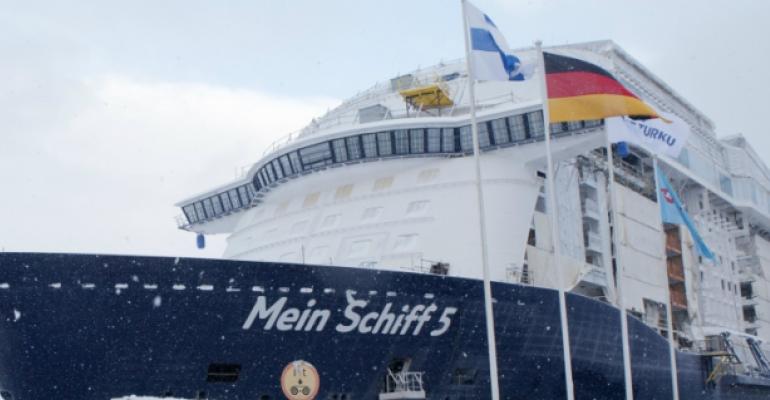 Mein Schiff 5 at her flaoting out ceremony in mid January

This is the first cruise ship to have been contracted and built totally under the ownership of the Meyer family. Mein Schiff 5 is a sister of Mein Schiff 4.

On Tuesday afternoon the ropes will be cut and 99,800gt Mein Schiff 5 and her crew of approximately 1,000 will set sail for Kiel, the first German port of call where she will dock on June 23.

Naming festivities will take place at Lübeck Bay near Travemünde on July 15.

'Although this is already our third newbuild, it’s still incredibly exciting to see a new ship grow from the first steel cutting to the finishing interior touches. In a good two-year construction period, countless people have dedicated themselves to turning ten million components into our ship. We are looking forward to finally putting Mein Schiff 5 into service in mid-July,' Meier said.

'We had the unique opportunity to build on the high standard and success of Mein Schiff 3 and Mein Schiff 4 to further perfect this series of ships with Mein Schiff 5. We are immensely proud of the result. This is in no small measure due to the trust and excellent cooperation with TUI Cruises,' Meyer added.

As with the entire Mein Schiff fleet, the focus of this latest entrant is well-being and spaciousness. New features include Japanese restaurant Hanami – by Tim Raue, with a menu created by the two-Michelin-starred chef from Berlin.

At Schmankerl – Entspannt genießen restaurant, Austrian specialties are served in a relaxing atmosphere.

On Deck 14, an additional outdoor pool, Lagune, features and in the reception area on Deck 3, the completely redesigned space offers a Thalia reading lounge and Nespresso Bar.

Together with the Meyer Turku shipyard, TUI Cruises has again placed strong emphasis on eco-friendly technologies. The tried-and-tested combined exhaust gas cleaning system that uses a desulfurization unit with catalytic converters significantly minimizes the emission levels of Mein Schiff 5. This technology allows sulfur emissions to be reduced by approximately 99% and nitrogen oxide emissions by around 75%.

Energy consumption is 4% lower than on sister Mein Schiff 3.

After its naming ceremony, Mein Schiff 5 will sail on its maiden voyage July 16-24. Operating round-trip Kiel, the cruise will visit Tallinn, St. Petersburg, Helsinki and Stockholm. The ship will spend summer operating varied voyages to the Baltic, northern Europe, Norway and western Europe.