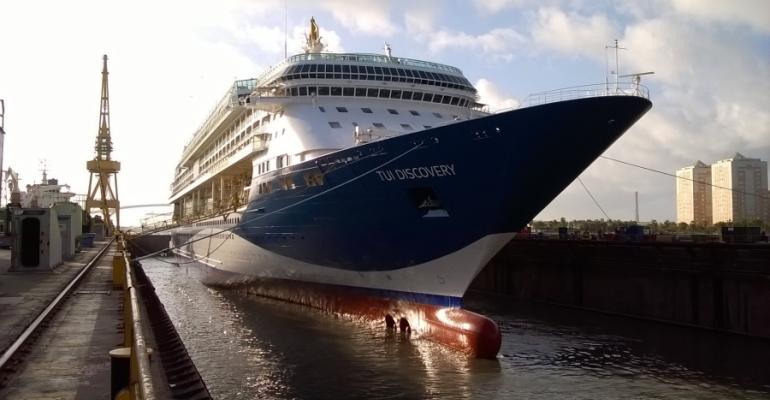 TUI Discovery, the newest addition to the Thomson Cruises fleet, reached another milestone Wednesday and is now in wet dock in Cadiz as part of the next stage of a major refurbishment process.

The ship is due to depart from the Spanish yard to Palma, Majorca on June 5 before embarking on the first itinerary around the Mediterranean on June 11.

During the makeover a total of 20,000 litres of paint, 5km of wiring and five tonnes of IT equipment have been used so far. 1,200 people have been working on-board to carry out the renovation work over the past few weeks, including 40 people just to paint the ship, and 730 crew are currently undergoing training.

At 264mtr long and 69,130gt TUI Discovery (the former Splendour of the Seas) is the largest vessel in the Thomson Cruises fleet. The 1,830 capacity ship (double occupancy) boasts 915 cabins, nearly 40% with balconies, and spans 11 decks.

Originally billed last year as joining the fleet as Thomson Discovery, the move to name the newest addition TUI Discovery is part of the strategy to start introducing the TUI brand to UK customers over the coming 18 months.

TUI Discovery will also be the first in the fleet to offer an all-inclusive drinks package as standard from summer 2017.