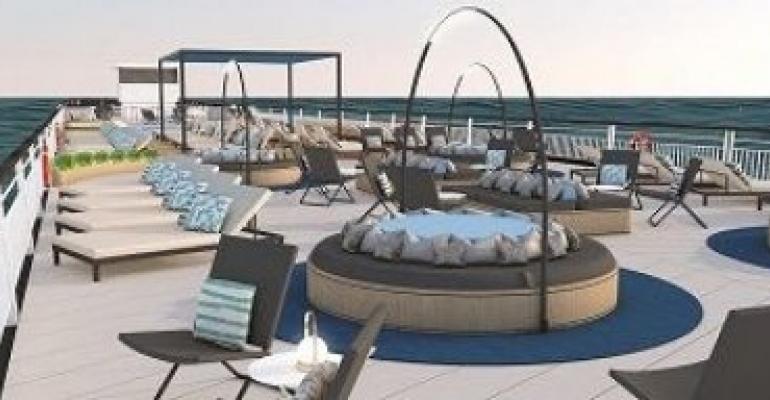 An impression of the new river cruise product TUI intends to launch for the UK market next year RENDERING: TUI UK & Ireland
TUI UK & Ireland is launching TUI River Cruises, catering to the UK market and for adults only. Three second-hand ships are going to be acquired to operate on the Rhine, Main, Moselle and Danube rivers starting next April.

Although the TUI River Cruises brand is new, TUI is not a newcomer to European river cruising. A fleet of upmarket river vessels tailored to the German source market operated between 2010 and 2014.

According to Chris Hackney, managing director of cruise for TUI UK & Ireland, passengers will be able to personalise their travel package. For example, the line will offer £120 credit toward shore excursion bookings, allowing each customer the opportunity to tailor their holiday to suit them.

The river vessels, understood to have a capacity in the range of 150 to 160 passengers, will have a 'handful of private balcony suites.'

Since newbuilds would take at least two years, TUI is starting with second-hand ships. Seatrade Cruise News understands they are currently operating for Germany's Werner-Tours Touristikinternational and for Switzerland's Reisebüro Mittelthurgau Fluss und Kreuzfahrten, and will continue their current service until the end of the 2019 season.

Subsequently, they are going to be upgraded for their new operation. Werner-Tours operates the WT Sonata, a 2010-built vessel currently carrying up to 186 passengers. Although it has not been confirmed that Sonata will be transferred to TUI River Cruises, it would be a candidate suitable to TUI's new approach.

Sonata began sailing nine years ago for TUI's 'Flussgenuss' river cruise concept. The brand, positioned in the premium segment and tailored for Germans, was discontinued at the end of the 2014 season. At that time TUI cited overcapacity, new taxes implemented by various destinations and the VAT increase from 7% to 19% for river cruises sold in Germany as reasons for leaving the market.

About 90% of the UK river cruise market involves itineraries on European rivers, with the Rhine/Moselle and Danube clearly leading the way. TUI River Cruises will start its business in these hot spots, although it is understood that the presence could be geographically extended with new ships added if the launch works out well.