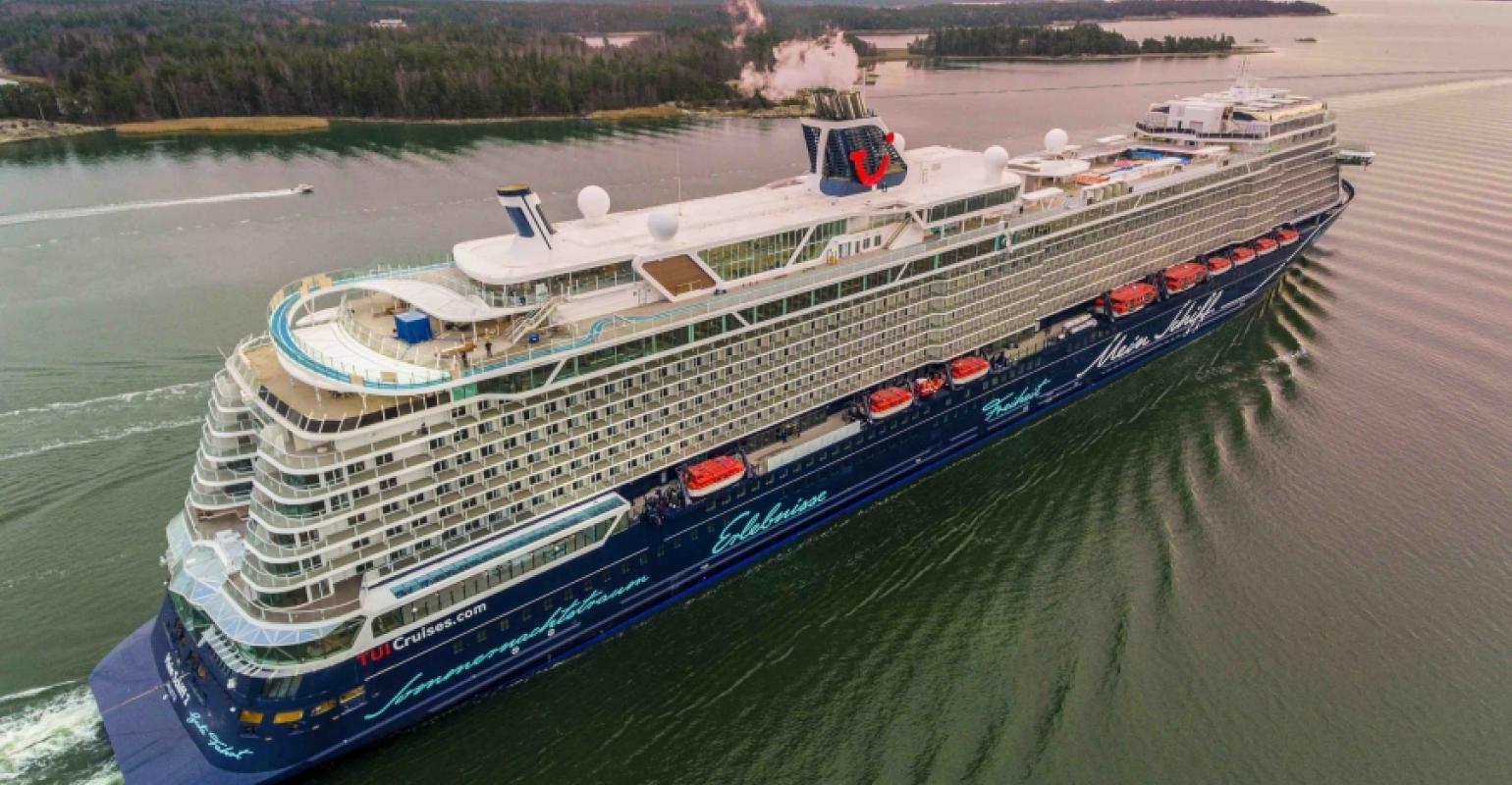 Mein Schiff 2 concludes TUI Cruises' newbuilds until the next delivery, in 2023 PHOTO: Meyer Turku
TUI Cruises took delivery of its latest newbuild, Mein Schiff 2, from Meyer Turku during festivities at Kiel's Ostseekai cruise terminal Tuesday morning. A number of German members of parliament were on hand.

The 111,500gt ship is the sister of Mein Schiff 1 that joined TUI's fleet last year. It carries up to 3,132 passengers and 1,092 crew, has some 7,100 square meters of restaurant space, 15 bars and lounges, and a 2,400 square-meter spa and fitness area. Ninety percent of the 1,447 passenger cabins have ocean views and 80% have balconies. Mein Schiff 2 is replacing a 1997-built predecessor of the same name, which will remain in the fleet until 2022 under the new name of Mein Schiff Herz.

Mein Schiff 2, then still flying the Finnish flag and under Meyer Turku's management, had arrived at Kiel on Jan. 5 for final outfitting work, provisioning, crew embarkation and other preparations. Dirk Claus, MD of Kiel Port, said it was the first time this had ever been done in Kiel. TUI Cruises and Meyer Turku had agreed on this arrangement to protect Mein Schiff 2—in particular, its highly sensitive underwater silicone coating—from ice in the eastern Baltic. Meyer Turku built the ship in just under 24 months and delivered it slightly ahead of time.

A plaque and key ceremony involved the Port of Kiel and Sartori & Berger, TUI Cruises' longstanding port agent. Claus noted Mein Schiff 2's maiden call was also the 175th visit of a TUI Cruises vessel at the port. Though based in Hamburg, the line has been extremely loyal to Kiel over the years. In 2019, 31 calls by TUI ships are scheduled, almost 50% of the total number of calls scheduled in German ports.

As Wybcke Meier and Jan Meyer outlined, Mein Schiff 2 consumes about 40% less energy than a 'conventional' cruise ship of the same size. This is achieved by an integrated energy management system, innovative lighting controls, LED use, an eco-friendly underwater silicone coating and a hydrodynamic hull shape. In addition, air conditioning generators have an innovative control unit and frequency-regulated motors to avoid wasting energy. For that purpose, 19,000 control points are fitted throughout the ship.

Mein Schiff 2 also has scrubbers and catalytic converters. Meier said TUI and Meyer Turku had carefully weighed the use of LNG during the contracting of Mein Schiff 1 and 2 but ultimately opted against it due to concerns about the availability of this alternative fuel.

On Wednesday Mein Schiff 2 is scheduled to sail from Kiel on the first of several preview cruises for sales partners and some of TUI's loyal customers before the christening cruise embarks at Bremerhaven on Feb. 3. The christening will take place in Lisbon Feb. 9 with the German vocalist Carolin Niemczyk as godmother.

Four-year break until next newbuild

Mein Schiff 2 temporarily concludes TUI Cruises' ambitious newbuilding program, which saw six ships inaugurated since 2014. Now Germany's No. 2 cruise operator has a four-year break before its next new ship, again to be built by Meyer Turku, arriving in 2023.