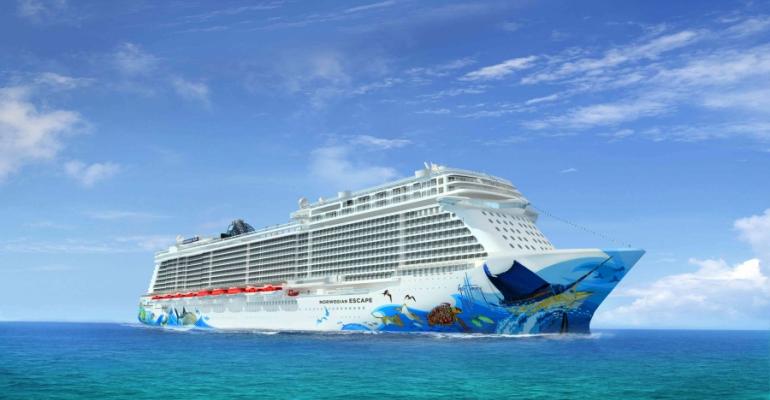 Norwegian Escape - a 15% Caribbean capacity increase for NCLH in a year when other brands' Caribbean supply is down slightly
UBS downgraded Norwegian Cruise Line Holdings to 'neutral' from 'buy,' on concerns that the company will be able to meet its reduced earnings and expense guidance.

'Our [distribution] channel checks find some price offers as low as $279 for seven-day Caribbean cruises in late Q3 and for Q4, with NCLH using price cuts, not just softer promotional tools like non-cash value-adds,' UBS analyst Robin Farley said in a note.

The brokerage's channel checks also suggest NCLH seems to be under more pressure for Q4 Caribbean pricing than other brands. In a year when the Caribbean is performing strongly for the cruise industry, NCLH attributes softer demand to higher supply. The company has 15% more capacity due to the addition of Norwegian Escape, while other lines' capacity is reduced in the low single digits.

UBS also reiterated its concern about NCLH not having as many European passengers to source as competitors do at a time when North American demand for Europe cruises is under pressure.

UBS reduced its NCLH estimates for 2016 and 2017, lowered its yield expectations for Q3 and Q4 and reduced the growth it had been looking for in 2017. Farley voiced concern that 2016 expense may end up closer to the 2.5% year over year increase NCLH had originally guided, instead of the 1.25% increase the company targeted when it lowered revenue expectations early this year.

When NCLH missed its Q2 guidance and cut expectations for the year, the company implied 2017 EPS guidance of $3.91 to $4.25 taking 2016 midpoint EPS, but 'we believe that is at risk,' Farley told investors.

'Our channel checks indicate prices on the books for 2017 are not looking as solid as for some other brands for North American sourcing,' Farley said.

She added the Norwegian brand will launch in China next year, while Carnival Corp. & plc is delaying the entry of Carnival Cruise Line and AIDA Cruises there at least a year, to 2018.

'Since this delay followed AIDA's brand launch party this summer in China, that suggests it has become more pressing that newer brands may need more support in China,' Farley said, adding that UBS checks with China cruise sellers indicated lower price points for Norwegian since it's a new brand.