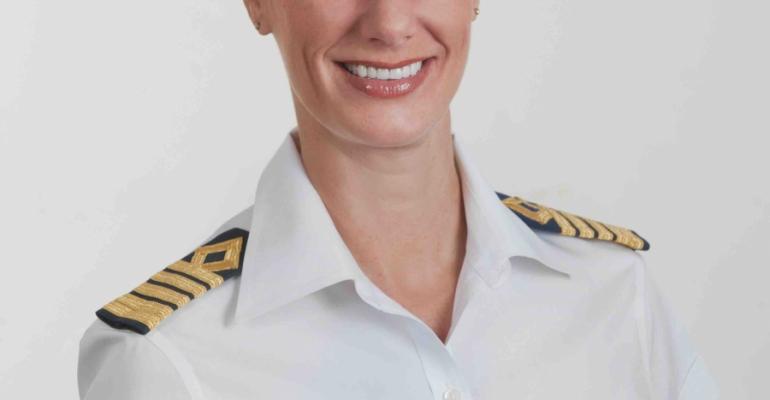 Celebrity Cruises has appointed its first female captain, Kate McCue, 37. Also unusual in the international mega-ship realm, she is a US citizen. The San Francisco native will command Celebrity Summit, sailing between the US East Coast and Bermuda, starting in August.

Lines including Royal Caribbean, Cunard and P&O Cruises have women captains but McCue is believed to be the first US female to helm a large international cruise vessel.

Celebrity president and ceo Lisa Lutoff-Perlo said the appointment will continue to pave the way for women in the maritime industry, adding: 'Of all the great moments throughout my career, this is at the top of my list.'

McCue has 15 years of experience and leadership in the maritime industry. She has managed ship logistics while sailing worldwide itineraries, including Europe, Asia, Australia, the Caribbean, the Pacific Northwest and Alaska, and the Panama Canal. She also has sailed several trans-Atlantic and repositioning cruises, and played a key role in the revitalization of ships in Singapore.

A graduate of California State University’s Maritime Academy, McCue has held a variety of roles in the maritime industry, beginning as a cadet and deck officer, then working through a series of successively more responsible positions to her most recent role as master mariner with Royal Caribbean International. McCue has earned numerous certifications in a variety of areas pertaining to leadership navigation, ship management and security.

'Becoming the first female American captain of a cruise ship has been a goal of mine for as long as I can remember,' McCue said. 'I look forward to working with an amazing team and the exceptional leadership who bring the Celebrity Cruises vision to life every day.'