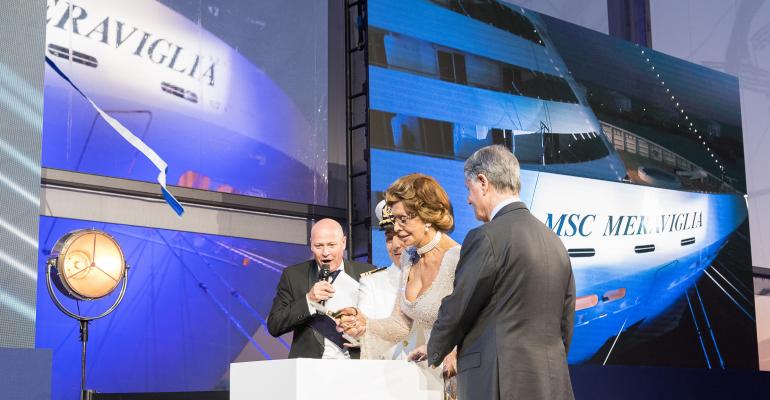 In a very French affair, MSC Meraviglia was named Saturday evening in a spectacular event held beneath the ship on the Le Havre quayside.

As the champagne bottle hit the hull, fireworks lit up the city of Le Havre, celebrating its 500th anniversary this year. Just prior, Loren made a short welcome speech in French.

Entertainment came from Moroccan-French actor and comedian Gad Elmaleh, music from local talent Patrick Bruel and Kids United, a French pop group of children created in support of UNICEF, MSC’s charity of choice . A troupe of can can dancers got the 2,000 plus audience in the party mood.

Later an exclusive gala dinner took place onboard in the company of special guests, authorities, key partners from the travel industry, global media and top management from MSC Cruises and its parent company MSC Group.

‘We have an ambitious vision for the future and MSC Meraviglia marks the start of the second phase of growth for our company,’ said Pierfrancesco Vago, MSC Cruises’ executive chairman.

‘For this reason, this evening is an extremely proud moment for all of us at MSC Cruises as we see the first of our next-generation ships being named.’

‘The new ships that we are building – between 2017 and 2020 alone, we will receive six new ships -- are purpose-built, featuring innovation in both product and design, as well as the very latest-cutting edge marine and consumer-facing technology to create unforgettable holiday experiences at sea for guests of all ages. MSC Meraviglia is the first to make this vision come to life, as it sets a new standard for cruise ships as a destination in itself.’

The ship is inspired by the wonders of the world, as Meraviglia literally means wonder.

The crowning moment of the evening was a parade of the ship’s officers, ahead of Loren cutting the ribbon and naming.

82 year-old Loren first became godmother of MSC Lirica, in 2003. She has named every newbuild since.

In order to conclude on a note of haute cuisine Hélène Darroze, the chef with 2 Michelin stars created a menu for the VIP gala dinner taking inspiration from her passion for combining the flavours of France with those of the UK to create a simple yet elegant gourmet experience.

The STX France built ship is the first Meraviglia class prototype that will be joined by a second in 2019 and two Meraviglia-Plus class ships (15mtr longer) in 2019 and 2020.

Laurent Castaing, ceo STX France congratulated MSC for choosing Le Havre for the naming ceremony, 'as this was the departure point and plave for the naming for many of the historic St Nazaire-built transatlantic liners such as Normandie and France.'

Some of the unique features on MSC Meraviglia include a 96mtr long promenade with 80mtr long LED sky screen overhead designed to be the social hub of the ship with bars and resaurants and shopping; two exclusive Cirque du Soleil at Sea shows created just for MSC Meraviglia with two performances six nights a week, at the aft Carousel Theatre; 12 dining venues and 20 bars; a dedicated family deck area; MSC for Me, the new digital experience designed for guests to get the most out of their holiday, with app and bracelet; MSC Yacht Club spanning three decks, private facilities and butler service round-the-clock and 10 different types of accommodations.

MSC Meraviglia will commence her maiden voyage from Le Havre to Genoa on June 4 and then her summer itinerary from Genoa from June 11.