With Viking, a chance to revolutionize ocean cruising, Hagen says 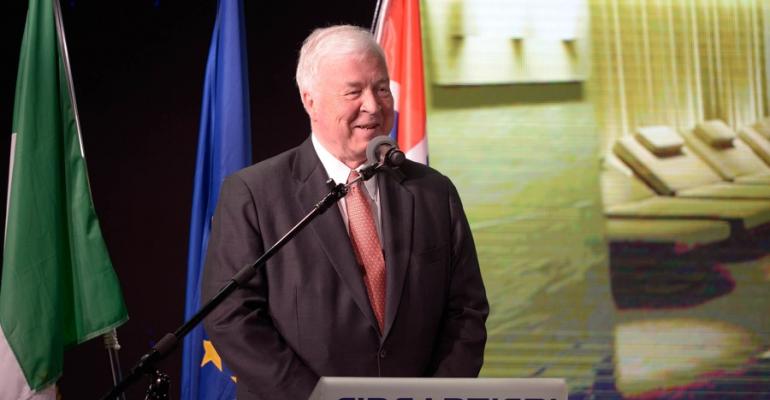 Torstein Hagen - Viking Ocean Cruises will be 'renowned for enrichment.' He is pictured at the ceremony for Viking Star's handover from Fincantieri on Saturday

Viking Cruises chairman Torstein Hagen said his new ocean-going brand will offer 'the best itineraries by far' and 'the fairest pricing.' Plus, 'We're going to be renowned for one thing: enrichment.'

The man who has built a world-leading river fleet of 64 vessels likes to quip that ocean cruises are for drinking people while the rivers are for thinking people. On Viking, however, travelers will be able to relive history, explore culture and 'not be treated like idiots, which I think is the case on many lines,' he said.

Hagen took delivery of the 928-passenger Viking Star Saturday, capping a week when he also inaugurated a dozen river vessels and revealed big aspirations for both the ocean and river segments.

2015 is the year he comes full circle, in a sense, by realizing his dream to launch an ocean-cruise brand after running the renowned Royal Viking Line in the 1980s.

Maybe he's superstitious but Hagen isn't making any predictions, describing this as 'just another year.' He said he's been 'very fortunate. Now we have an extremely solid financial situation, money coming out of our ears.' This, after 'starting with nothing' on the Russian rivers in 1997.

Viking has 'a chance of revolutionizing the ocean cruise industry,' Hagen quietly stated, but only time will tell.

The interiors of the freshly delivered Viking Star have an airy, minimalist Scandinavian design, all accommodations sport verandas and the ship is touted as offering more alfresco dining than any other. In addition to the already known features, there are 'a couple surprises' including a bar with a rare liquor selection.

Fares are inclusive, bundling in an excursion in each port, alternative dining, beer and wine with lunch and dinner, port charges and more.

'We're also known for what we are not—no casino, no bathtubs except in the suites. We don't encourage children. There are no extra charges for Wi-Fi,' Hagen said, adding there's a usage limit because travelers who stream eat up bandwidth.

Viking announced its ocean start-up on May 17, 2013, and after two months, 80% of the first ship's inventory was booked. Some 49% of 2016 capacity is booked counting two more ships entering service.

After setting Guinness World Records two years in a row—2013 and 2014—for most ships inaugurated in a day, Hagen introduced a dozen more river vessels last week. As earlier reported, Viking has a chance at another world record since Bergen Mayor Trude Drevland has invited 20,000 people to Viking Star's naming ceremony on May 17, where she'll be the godmother.

During the recent river inaugural festivities in Amsterdam the Viking chief said six vessels will enter service in 2016 and options are in place for 18 more. On the ocean side, Viking Sea and Viking Sky are due in 2016, and the company holds an option for a fourth sister. Hagen indicated he aspires to 10 ocean vessels.

It's a good year for the ocean cruise segment in general, in his view, while Viking's river business is up 10%, which Hagen called 'a little slower than expected' due to events like the Ebola outbreak, the Paris terrorist incident and tensions between Russia and Ukraine. This year Viking laid up its one Ukraine ship and two of its five Russia vessels.

The market 'will come back, I'm sure,' Hagen said, noting that Nile cruises are coming back after Egypt's tourism downturn.

Viking this year will carry 250,000 river passengers. Forty of the 64 vessels are the new-design Viking Longships, and four are 'baby Longships' built for the Douro and the shallow Elbe.

The just-inaugurated Elbe pair, which carry 96 passengers each, are of an innovative design that Hagen deems 'a major breakthrough.' Each has two decks (instead of three on the Longships), and ample use of aluminum makes them 25% lighter. Each is 110 meters long with an 84-centimeter draft.

It's too early to share details about the Mississippi River product announced some weeks ago by Louisiana Gov. Bobby Jindal; there is no building contract yet. Hagen said only that the newbuilds will be like the Longships, but taller and wider.

River cruising has grown at a 'phenomenal rate'—30% a year for the last five years for Viking and 12% annually for others, he said. Viking claims a 50% share of the North American market. The company has poured a hefty $600m into marketing since 2003.

'We are not surprised river cruising is growing so fast because we are causing it to,' Hagen said, adding that competitors benefit as well.

The Longships' square-bow design makes room for up to half a dozen additional cabins and there's a third deck that most riverboats don't have so Viking can take 190 passengers per boat instead of the 160 most others carry. Diesel-electric propulsion reduced vibration, so the best suites can ride directly above the engines.

Carrying more people means fares are lower. Yet service quality is high, Hagen said, reporting that 97.8% of passengers rate their Viking cruise above or far above expectations.